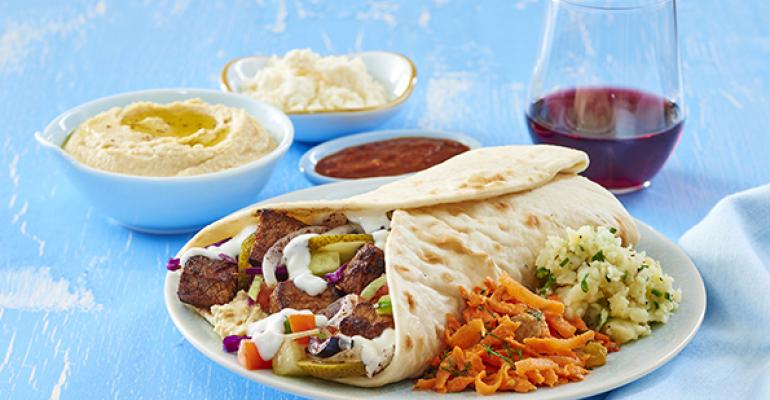 The owners of Daphne’s California Greek will convert as many as 10 to 12 locations to a new fast-casual concept called Yalla Mediterranean, the company said this year.

In December, the new owners experimented with rebranding a Daphne’s unit in Pleasant Hill to Yalla, with a broader eastern Mediterranean menu, but keeping the fast-casual format.

Wolfgram said he was not sure whether the entire 49-unit Daphne’s chain would be converted to Yalla. That decision will likely be made at the end of the year.

But Yalla shows promise at a time when consumers are hungry for the healthful cuisine of the Mediterranean, he said. The word “yalla” means “let’s go” in various dialects of the region.

“We felt the broader approach of expanding the menu throughout the eastern Mediterranean allowed us to give people the variety they were looking for with different flavor profiles,” said Wolfgram. “There are also so many options on the menu for people with various dietary restrictions, like gluten free or vegetarian, and everything is made fresh in house.”

The conversion is not just a remodel, Wolfgram noted. Yalla is an entirely different brand with a distinct menu, though there are some Greek flavor influences. “From the customer perspective, it’s all new,” he said.

Yalla’s kitchens showcase rotisserie-conveyor grills, for example. Guests can customize their meals by choosing a protein that immediately goes the grill. Then guests build their plate as a pita wrap, salad or Yalla plate with rice and sides.

The chain will focus on growing in California over the next two years, Wolfgram said. Beyond that, the plan is to continue expanding regionally, and eventually nationally.

There are no current plans to franchise, but Wolfgram said the company has not ruled it out long term.