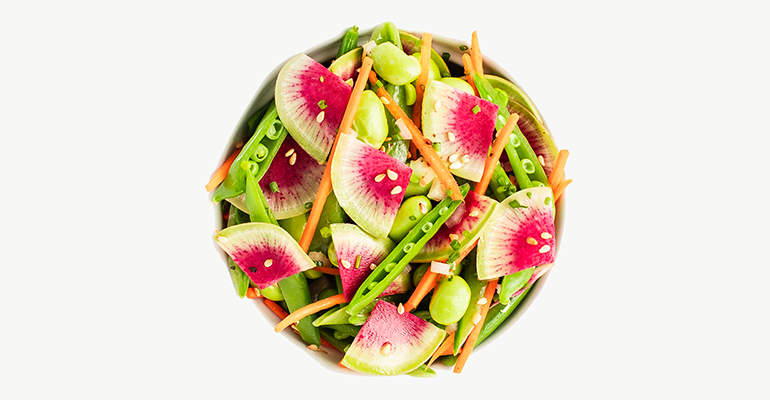 From next generation ingredients to chef-driven new flavors, the entrée salad is updating its evergreens

This past January at the height of the pandemic shutdown that kept workers in their homes and out of restaurants, Datassential reported that more than two-thirds of operators serving lunch offered salads, making it the number one item on lunch menus. Entrée salads even outranked sandwiches and affirmed the continuing appeal of salads as a main course.

Our decades-long love affair with the entrée salad reflects the impact of California cuisine, which introduced and legitimized the concept of salad on the center of the plate, and the contemporaneous runaway success of the Caesar salad, a Mexican import that took the country by storm with its bracing acidity. Equally important to its longevity is the unstinting innovation of chain chefs, whose creative composed salads successfully capture the zeitgeist of changing consumer tastes and emerging ingredient trends.

From the outset, entrée salads functioned as a means of introducing less familiar, more assertive flavors, like the Blackened Tuna Caesar Salad at TGI Friday’s in the mid-1990s that introduced the Cajun food craze to the mass market, as well as more the same menu is noteworthy for out of the box dressing choices like Hoisin peanut, orange sesame and hot bacon mustard, also from TGI Friday’s.

The halo of health cast by entrée salads also remains a key driver of their success, as with the trendy Antioxidant Salad on offer at Urban Plate’s 19 locations in California and Washington DC. It mixes lettuce with organic baby kale, pickled onions and raw walnuts among other ingredients that are topped with mint-lemongrass vinaigrette; and the operation also boasts a thoroughly modern chicken Caesar salad made with organic romaine and baby kale, grilled cage-free chicken and organic tomatoes.

Of course, California chains don’t have a lock on salad innovation. In Atlanta, Fresh To Order promises the finer side of fresh and fast with dishes like the attractive F2O Fig Salad that mixes golden raisins, dried figs, blue cheese and candied walnuts atop mixed baby greens with balsamic vinaigrette, and suggested add-ons include ale-laced chicken tenders.

In Charleston, S.C., local restaurant Butcher & Bee takes a fun and unexpected approach to a standard salad with the Mediterranean-inflected Grilled Chickpea Caesar with little gem lettuce and tahini Caesar dressing. The operation’s Nashville outpost gives patrons a choice with salads that do double duty, like the Crispy Falafel Salad with sambal-pickled raisins, charred red onions and honey-lemon vinaigrette, which can also be stuffed into a pita and served with fries on the side.

Recently, we have seen the emergence of restaurant concepts dedicated to salad, most of which bring the salad bar of the 20th century into the 21st by allowing patrons to have their salads built to their specifications. Many of these have rotating specials such as the Green Goddess and sweet potato salad at Los Angeles-based Sweetgreen from this winter that married the title ingredients with chopped pickles, hardboiled eggs, roasted almonds and shredded cabbage, among other ingredients.

On the opposite coast, the chef-driven menu at Los Angeles-based Tender Greens combines the old and the new. The former includes the classic Tuna Niçoise with the requisite capers, green beans, olives and potatoes in sherry vinaigrette, while the latter caters to lifestyle diets with salads like the Happy Vegan with farro, quinoa, green hummus and tabbouleh in lemon vinaigrette.