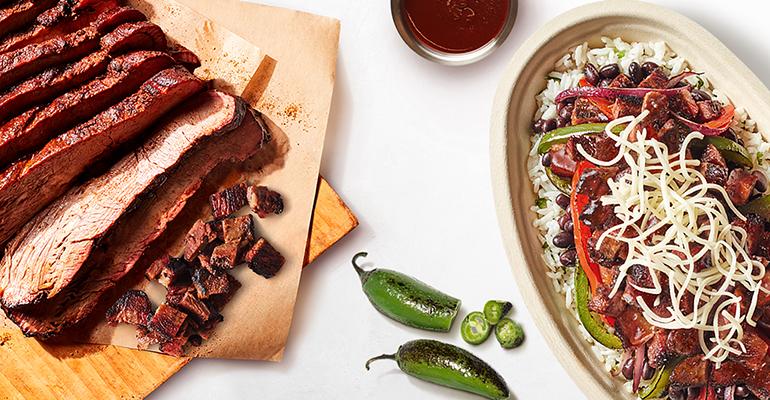 Chipotle
Chipotle is testing smoked brisket seasoned with a spice blend, seared on the grill and finished with a sauce made with Mexican peppers at select locations.
News>Fast Casual

The test of a new protein comes as the chain continues to trial Cilantro-Lime Cauliflower Rice and a new quesadilla in other U.S. markets.

Following the success of carne asada, Chipotle Mexican Grill revealed Monday that the company is testing another beef protein: brisket.

Smoked brisket is now available at 64 restaurants throughout Cincinnati and Sacramento, Calif. The protein is seasoned with a spice blend, seared on the grill and finished with a sauce made with Mexican peppers, the company said.

"We're thrilled to offer a new, responsibly-sourced brisket that tastes terrific and meets our industry leading Food with Integrity standards," Chris Brandt, chief marketing officer, said in a statement. "The richness of our real Smoked Brisket recipe delivers a craveable new flavor to our guests as we continue to innovate across our menu."

The fast-casual chain is notorious for taking time to test products through its “stage-gate” process before adding them to the national menu.  In 2019 and 2020, only three items have gone national after testing: Carne Asada, Supergreens Salad Mix and Queso Blanco. The cheese sauce, which is now performing well, had to be re-formulated after the first version drew criticism for being too 'grainy.'

The Newport Beach, Calif.-based company has been tinkering with a new quesadilla for more than a year. Restaurants in Cleveland and Indianapolis continue to test the product as a digital-only menu item.  In July, the company began testing Cilantro-Lime Cauliflower Rice at restaurants in Denver and throughout Wisconsin. Since that time, the cauliflower rice test has been expanded to Orange County, Calif.

The brisket, available for a limited time only, can be ordered through all channels including carryout and delivery.

Updated: This story has been edited to include an update on the cauliflower rice test.