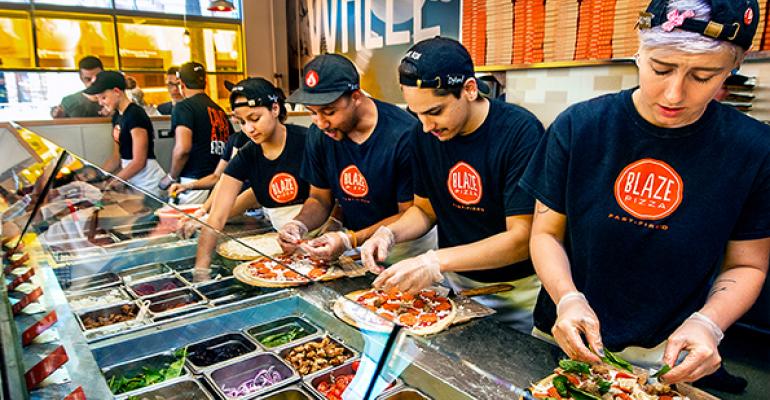 Chain to hit 50 units by mid-December; growth to accelerate in 2015

Blaze Pizza next week is scheduled to become the first of the rapidly growing crop of fast-casual pizza players to hit 50 units open.

In fact, on Dec. 18, four Blaze locations are scheduled to open, which will bring the unit count to 51, said Jim Mizes, the Pasadena, Calif.-based chain’s president and chief operating officer. The four units are in Laurel, Md.; Bayshore, N.Y.; Morrisville, N.C.; and Canoga Park, Calif.

Other fast-casual pizza chains are not far behind.

Pieology, for example, one of the first fast-casual pizza concepts to open in California in 2011 and based in Rancho Santa Margarita, Calif., is scheduled to hit 50 units open by mid January. By the end of 2015, that chain expects to have 180 units open.

Blaze, however, is also picking up its growth pace.

“We anticipate opening about 70 restaurants next year, so we’re looking to be the first to 100 as well,” said Mizes.

Blaze was created by Rick Wetzel, the co-founder of the Wetzel’s Pretzels chain, along with his wife Elise Wetzel in 2012.

As with most in the fast-casual pizza niche, the brand borrows from the Chipotle Mexican Grill service model with a build-your-own format. Pizzas are baked in minutes in an open-hearth oven.

When Blaze got its start, concepts like 800 Degrees and Pieology were growing in Southern California. MOD Pizza was coming out of Seattle and Your Pie and Uncle Maddio’s were popping up in the Southeast.

Next year, Blaze plans to open three more company-owned locations, in part because unit economics are strong, but also to test new products and demonstrate to franchises that “we have skin in the game,” said Mizes.

“We listened to our franchise partners and others and realized that we have to have our own collection of restaurants,” he said.

Meanwhile, working with 36 franchise groups, the chain has commitments for 333 locations through 2019. Mizes said 45 of the top 50 markets are sold, with only a few territories left: Hawaii, Alaska, Philadelphia, Atlanta, Pittsburgh, Iowa and Kansas.

For that reason, Blaze is not a likely target of strategic buyers like DineEquity Inc., the Glendale, Calif.-based parent of IHOP and Applebee’s, which is looking for a third franchise brand to grow. Some have speculated that a fast-casual pizza concept is a likely candidate.

“We’ve basically already sold out the country, so we’re probably not a good fit for DineEquity,” Mizes said.

The challenge, said Mizes, is finding real estate. Blaze is not only in competition with others in the pizza space, but also with concepts like Chipotle, Habit Burger Grill and Panera Bread – concepts looking for an end cap with 2,200- to 3,000-square feet and a patio.

Mizes declined to share sales figures. According to the company’s Uniform Franchise Disclosure Document, the most recent of which was based on only two units open a full year as of March 2014, restaurants were averaging about $35,308 in sales per week, which would be roughly $1.8 million per year.

Next year’s FDD renewal is likely to give a clearer picture of results with a larger unit sample. Blaze is also building brand awareness.

Though the fast-casual pizza model is fairly new, consumers “get it,” Mizes said.

“In new markets, sometimes it takes a minute, but more and more you see people walk into the restaurants and say, ‘Oh, it’s the Chipotle or Subway of pizza. It’s build it down the line as you go. I get it,” he explained.

The more familiar the model is, the more likely customers will recognize points of differentiation among the many players in the niche, he added.

Blaze is known for its thin 11-inch crust, developed by executive chef Bradford Kent. Dough is given a 24-hour fermentation period, which the company said offers a light-as-air crispness.

Guests can select signature pizzas, or build their own from a wide selection of toppings. Pizzas are “fast fire’d” in open-flame, gas-fire ovens in about two minutes. All pizzas are under $8.

Mizes said sales are evenly split between lunch and dinner at Blaze, and the chain does about one-third of sales as takeout.

Like most fast-casual pizza concepts, Blaze does not deliver. But, Mizes said, “Never say never.”

Despite the competitive environment, Mizes said fast-casual pizza will continue to expand.

“There’s no reason why there aren’t going to be thousands of these fast-casual pizza restaurants, just as there are thousands of burger and sandwich shops,” he said. “I think this category is here to stay.”