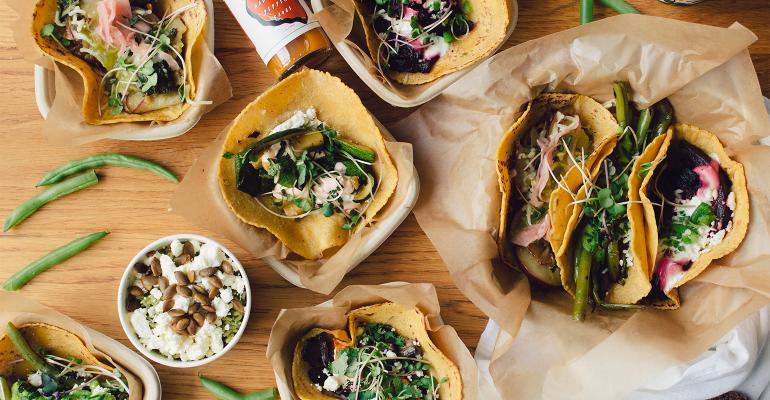 Bettina Stern, Chaia Tacos cofounder, on being ‘plant-powered,’ not plant-based

How the D.C.-based fast-casual chain is building buzz

Chaia Tacos, a Washington, D.C.-based fast-casual restaurant chain, is entirely vegetarian and about 95% vegan-friendly, according to cofounder Bettina Stern.

“I like to call us plant-powered,” she said. “Our mission at Chaia has really been to get more folks eating their vegetables.”

Related: Paul Macaluso, Another Broken Egg CEO, on how the breakfast chain has increased sales and retention

The chain, which started as a stall at a farmers market in 2013, accomplishes that goal by making it as easy as possible on the consumer. Stern pointed out that vegetables can be much more complicated than meat dishes, requiring cleaning, peeling, deciding how to cook them, which seasonings to use and so on. While all restaurants take care of the prep work for consumers, Chaia Tacos also makes dining easier on the mind by offering a menu of pre-determined tacos.

“We’ve taken the hard work out of making your vegetables really tasty,” Stern said. “Because our menu is chef-driven, we’ve really taken the guesswork out of what goes with what.”

Chaia’s menu of set tacos uses ingredients the chefs think taste best in combination, though consumers are welcome to make changes and swaps. Stern hopes that this, along with keeping the food “approachable and affordable,” will make the brand easy to replicate and eventually expand nationwide.

Having pre-determined menu items follows an industry trend as chains as large as Subway are moving away from emphasizing menu customization.

Focusing on vegetables — “the most luxurious item on the plate,” according to Stern — is also advantageous as restaurants that serve meat have struggled with both supply chain issues and inflation in recent months and years.

“Farmers are still growing,” she said, with the only ingredient they’ve seen impacted by inflation being corn.

Bettina Stern will be speaking at CREATE: The Future of Foodservice in Denver, taking place Sept. 19-21.