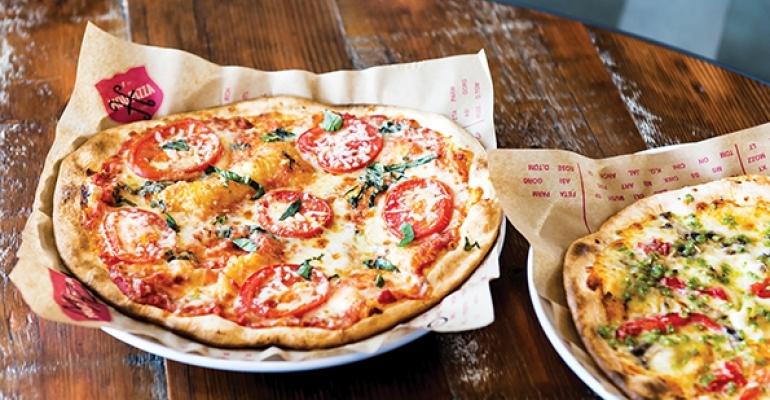 The fast-casual pizza business is much like the pizzas they sell: Made quickly, and with a wide variety of flavors.

Consider the three biggest chains that have emerged so far as the largest in the burgeoning sub-sector, all of which turned up the heat on their growth and used vastly different strategies to do so.

Blaze Pizza. The Pasadena, Calif.-based chain that now has over 100 locations. It is growing quickly with an all-franchised business model and has sold out the rights to develop every territory in the U.S.

MOD Pizza. Thanks to the backing of $74 million in equity financing — and growing — the Bellevue, Wash.-based chain tripled in size last year to 92 locations, 80 of which are company-owned.

Pie Five Pizza Co. Started as an airport format by the buffet chain Pizza Inn, Pie Five now has more than 80 franchise and company locations, and continues to grow thanks to the cash generated by its parent company. The company expects to pass 100 units by June.

“There’s going to be room for a lot of different companies in the segment,” said Randy Gier, CEO of Pie Five parent company Rave Restaurant Group Inc. “If you look at sandwiches, for instance, there are a lot of companies. And they’re all different. Jimmy John’s is different from Potbelly, which is different from Firehouse Subs.”

Fast-casual pizza is perhaps the fastest-growing sub-segment of the restaurant industry. The companies boast fast ovens that can cook pizzas in mere minutes, while employees make the pies in front of customers — giving customers the option to build their own.

The three largest are among several concepts jockeying for position in a bid to be the market leader.

The segment includes Pieology, which now has about 85 locations, as well as Pizza Studio and PizzaRev, both of which have more than 30 units. All told, the biggest players have opened up 175 locations in a short time. And many of these companies are prepping for even more growth this year.

Both MOD Pizza, and Blaze Pizza, plan to grow rapidly this year — MOD plans to add 100 locations this year, which would more than double its unit count. Blaze, which recently became the first chain to exceed $100 million in systemwide sales, expects its system to reach $185 million this year — a growth rate of nearly 85 percent.

Pie Five recently noted that its systemwide sales more than doubled in the company’s fiscal second quarter, which ended Dec. 27.

The aggressiveness suggests a potential quick oversaturation of markets with fast-casual pizza concepts — and there’s some early evidence that could have started. Pie Five’s same-store sales in its second quarter fell 1.6 percent, though the company said it was lapping significant growth from a year ago.

Many other emerging segments ran into problems when a lot of players tried to grow quickly, such as frozen yogurt and better burger concepts.

Bringing a new sensibility to pizza

The chains argue, however, that the companies are bringing a new sensibility into the business, making it a lunchtime option for busy diners not available before. Chain’s like Domino’s Pizza and Papa John’s International are popular places, but they’re not true lunch destinations. In contrast, fast-casual players generally serve individualized pizzas. No sharing needed.

The pizza business is a $35.5 billion market. Fast-casual concepts hope to get a chunk of that. “Fast-casual pizza can gain 10 percent share of that market,” Mizes said. He noted that his chain’s business is split evenly between lunch and dinner, a remarkable accomplishment for a pizza concept and similar to other fast-casual chains.

The companies also have some serious backing behind them. Blaze Pizza last year received a remarkable investment from the Cleveland Cavaliers’ basketball player LeBron James — who left the much bigger McDonald’s Corp. It sold out the development rights to just 44 franchisees in just three years. Those operators could ensure rapid growth of the chain so long as it performs.

And so far it appears to be doing so. Mizes said that Blaze Pizza’s older units have volumes of $1.65 million. While that is a small sample size, it is a big volume for a new fast-casual concept.

“We aspire to be a tattoo-worthy brand, so guests are proud to be associated with us,” Mizes said.

Not to be outdone, MOD Pizza has received $74 million in equity financing, and is planning to raise even more. Svenson and his wife Ally are restaurant-creating veterans, having started a coffee company in the U.K. that was sold to Starbucks, and then a deli chain in that country which went public. Investors include Dunkin’ Brands Group Inc. CEO Nigel Travis, as well as Spencer Rascoff, the CEO of the real estate site Zillow, in addition to the private-equity group PWP Growth Equity.

MOD Pizza is also using an “enlightened capitalism” approach. Among its strategies is higher pay for employees and efforts to drive more employee loyalty. “If you want to build a great business, you build it like you want to own it forever,” Svenson said.

Other pizza chains have big backing, too. Buffalo Wild Wings invested in PizzaRev. And then there’s Pie Five, started by Pizza Inn, which generates the cash to enable Pie Five to grow.

While speed matters, Gier said, it’s more important to get it right. “This is a marathon,” he said. “We’re not going away. We’re going to be here a long time. If the restaurants are not operating well, we won’t be. What matters is who is standing in five years or 10 years.”