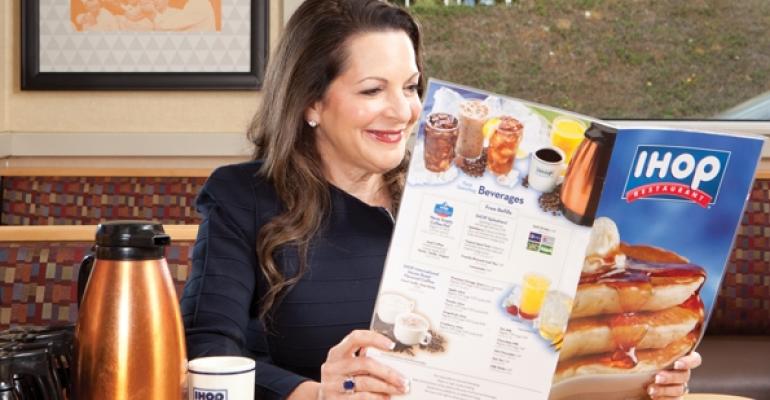 Julia Stewart has been a force to behold for decades, and there’s no reason to stop watching yet.
Since she made her mark as president of the domestic division of Applebee’s International Inc. in the late 1990s, Stewart has repeatedly grabbed headlines for her business acumen, tenacity and twists of fate that might seem improbable.

Stewart — a marketer turned operator who has worked for such brands as Taco Bell, Burger King and Carl’s Jr. — helped to grow Applebee’s from 1,000 units to nearly 1,400 from 1998 to 2001, firmly cementing the brand’s position as the nation’s largest casual-dining chain.

In late 2001, she was named president and chief operating officer of IHOP Corp., putting her at the head of the iconic family brand where she had started her restaurant career as a server at the age of 16. Within six months she was named chief executive, and slightly more than four years later she was named chairman of the board.

But Stewart secured her place in restaurant industry history when in 2007 she led IHOP’s $2.3 billion acquisition of Applebee’s. Many had viewed the transaction as improbable given that IHOP had a market capitalization about half that of Applebee’s at the time. Some observers called the deal Stewart’s retribution for being denied the CEO title at Applebee’s, although Stewart denied she would take on that sort of debt for ego. Still, she won.

DineEquity Inc. was born in June 2008, boasting more than 3,300 restaurants worldwide operating under the IHOP and Applebee’s brands, and placing Stewart at the top of the world’s largest full-service restaurant company.

Since then, Stewart has fulfilled several of the goals she set during the acquisition, including refranchising nearly 500 company Applebee’s units to make DineEquity a 99-percent franchised operation. Stewart expects to complete a systemwide remodel of Applebee’s by the end of this year.

Today, Glendale, Calif.-based DineEquity’s two chains boast more than 3,600 units and total systemwide sales of about $7 billion. The company’s total debt has been reduced by more than $1 billion since the acquisition. Its stock closed at $83.14 Jan. 10, a year-over-year increase of more than 20 percent.

Still, there are hurdles ahead. Both Applebee’s and IHOP compete in industry segments — casual dining and family dining, respectively — that remain challenged by the slow economy and consumers’ growing appetite for fast-casual brands.

For the third quarter ended Sept. 30, DineEquity reported a 0.4-percent decline in same-store sales for Applebee’s despite an increase in check averages. Stewart noted, however, that the chain still outperformed its segment peers, according to benchmarking metrics.

At the same time, IHOP posted a 3.6-percent increase in same-store sales, its biggest jump in five years. Stewart pointed to a menu redesign that had guests trading up to items that, in some cases, had merely been overlooked for years.

In December, Stewart announced the creation of a division intended to grow both brands overseas. By month’s end, IHOP had opened its first restaurant in Saudi Arabia.

“We’re doing all the right things, but it does take time,” she told analysts in October. “We know we can get there, and we’ll get there again.”