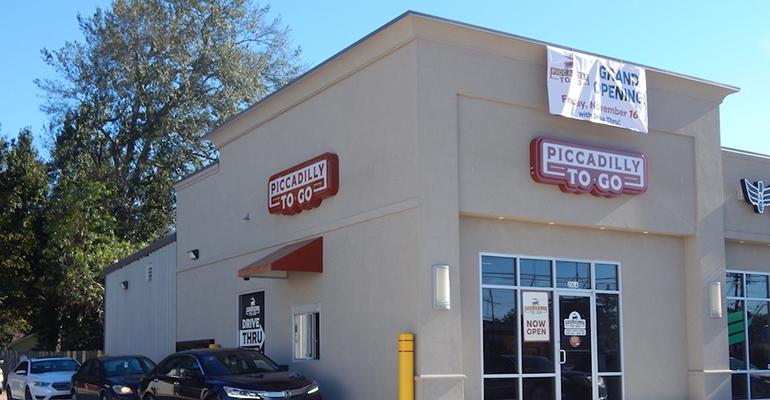 Piccadilly Holdings LLC plans to open the third unit of its smaller To Go location May 1 in Olive Branch, Miss., as it continues to hone the predominantly carry-out version of the 75-year-old cafeteria brand.

Unlike typical cafeterias, the To Go units also offer drive-thrus for order pickup. The original To Go location in Cordova, Tenn., which opened last year, was carryout-only and didn’t include seating, but the company is seeing demand and accommodating a few on-premise diners. 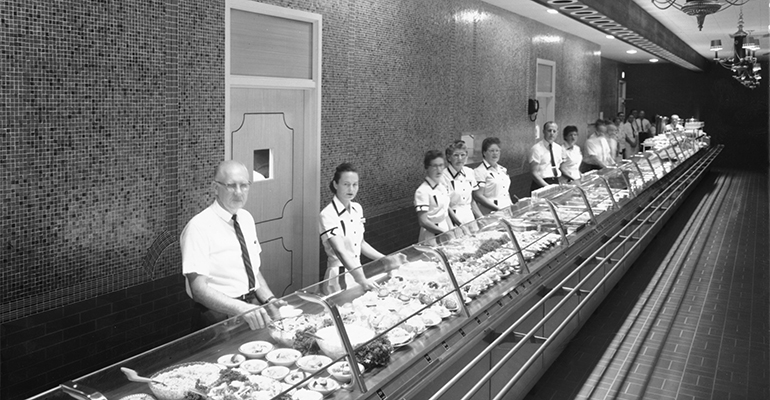 Photo: Piccadilly’s servers line up in 1944 at the original cafeteria in Baton Rouge, La.

“We have just begun testing limited seating eight to 16 seats (two and four tops), as there has been some demand during the lunch daypart,” said Max Jordan, Piccadilly’s vice president of marketing.

The To Go unit offers Piccadilly menu classics like Southern fried fish, smothered pork loin and carrot soufflé that can be picked up at the store or ordered in advance online or over the phone.

“We have seen growth in our target demo of [age] 25-44 families and even seen an uptick in young Millennials and Gen Z guests,” Jordan said. 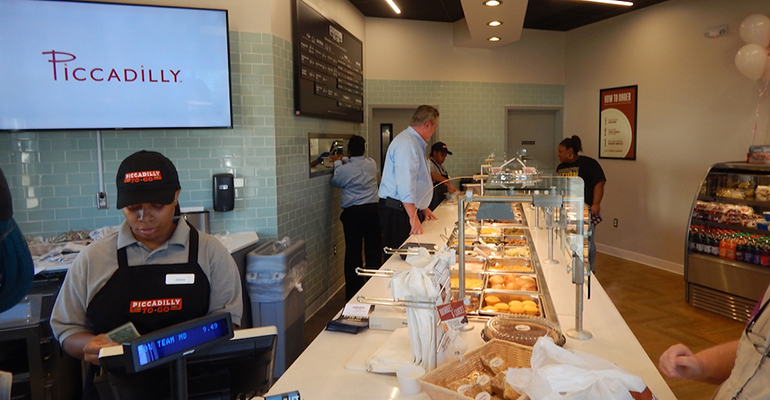 Piccadilly, which reached 270 restaurants in 1998 after the acquisition of competitor Morrison’s Cafeteria’s, has gone through several bankruptcy downsizings, including one in 2003 and the most recent in 2012-2013.

Now at about 40 units in seven Southern states, the company is looking to tap into its long regional history but in a smaller format. It has 14 units in its home state of Louisiana as well as nine in Georgia, seven in Tennessee, four in Mississippi and two each in Alabama, Florida and Virginia.

The company said take-out orders now account for more than a third of total sales, which prompted the To Go concept expansion.

“This is one of the sharpest trends we’ve ever seen. Families are just as busy as ever, but they want the quality and freshness of a home-cooked meal,” said Piccadilly CEO Azam Malik, who also serves as CEO and president Dallas-based Falcon Holdings, in a statement. “Many of those families are finding what they want with takeout from Piccadilly.”

Piccadilly was founded in 1944 by Tandy Hamilton with a single, cafeteria-style restaurant in downtown Baton Rouge.

“Tandy’s idea was serving liberal portions at the highest quality for fair prices,” Malik said. “That sounds common sense these days, but his ability to put all that together in a family-based atmosphere was well ahead of its time.”

Jordan said response to the To Go concept has been positive.

“We are able to expand our geographic coverage to guests who do not normally have easy access to Piccadilly,” Jordan said. “We continue to look for ways to meet the needs of today convenience minded consumers.”

In addition to its retail units, Piccadilly offers contract meal service for larger clients like business parks and schools and serves as a disaster-relief contractor in Louisiana and Georgia.