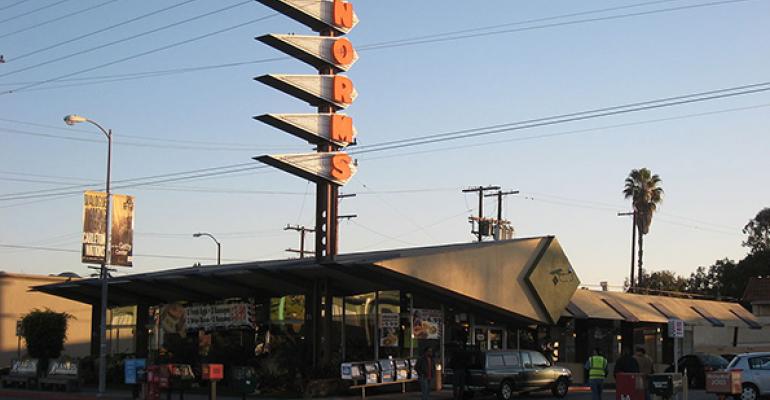 65-year-old family-dining brand to get refresh

The new owners of the iconic Norm’s family-dining chain in Los Angeles see an opportunity to grow the 65-year-old brand.

Founded in 1949 by Norm Roybark, the 18-unit chain has been family owned for three generations until earlier this month, following the close of an acquisition by a new management team led by Mike Colonna, now president of Norm’s, in partnership with boutique investment bank CapitalSpring LLC.

Terms were not disclosed. Trinity Capital served as financial advisor in the deal.

Colonna is an industry veteran who has worked with brands such as Burger King, Victoria Station, Boston Chicken and various Brinker International concepts. He worked most recently with turnaround specialist The Restaurant Management Group, or RMG, in New York.

But Norm’s is not in need of a turnaround, said Jim Balis, RMG’s president, who also works with CapitalSpring.

“Norm’s has shown many years of sales and traffic improvement,” said Balis, an advisor for the brand. “The goal is to continue that success.”

Colonna said the first step is to conduct an in-depth evaluation of the brand and opportunities for the menu.

Norm’s is known for its “Bigger Better Breakfast,” including scratch-made pancakes and steak and eggs, as well as traditional comfort foods. The restaurants are open 24 hours, seven days a week.

Colonna said the chain needs to better communicate its scratch-made cooking and the emotional connection the brand has with its customers, many of whom have been dining at Norm’s for generations. The average tenure for general managers is 20 years, he noted.

Many of the restaurants could also use some TLC, Colonna said. The company is working on a new prototype design that will take the first step toward growth.

“The intent is to grow, at least initially, to be a stronger regional brand here in Southern California,” he said.

One battle so far has been over a Norm’s location on La Cienega Boulevard in Los Angeles, built in 1957, and known as one of the few remaining examples of Googie architecture, a futuristic style popular in the 1950s and ’60s.

Colonna said the property was sold to a Beverly Hills investment group, which reportedly planned to demolish the building — a move that caught the attention of the Los Angeles Conservancy, which is seeking historic-cultural monument status to protect the structure.

Colonna said the company is working with its new landlords and the Conservancy to remain at the location and keep the iconic building intact, but, he noted, “We don’t have a ton of control over what they do with it.”