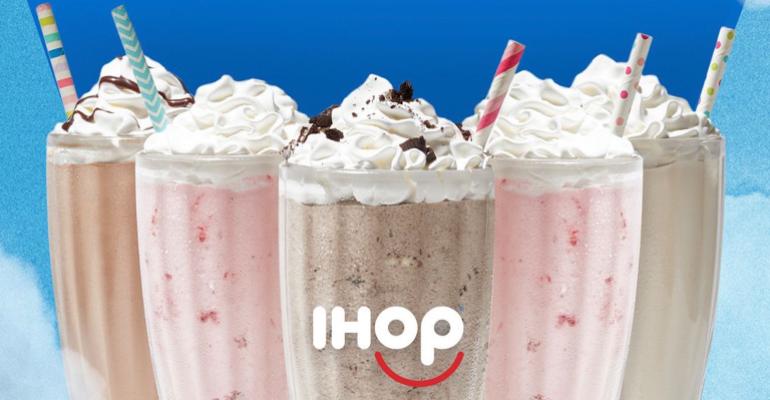 Idea for Comedy Gives Back benefit began on social media

IHOP brought back its Milkshake Monday holiday promotion again this year, extending the special deal beyond chocolate to all flavors.

The Glendale, Calif.-based dining brand, which started the Milkshake Monday in 2021, said dine-in guests at participating IHOP restaurants could buy one milkshake and get another free from noon to 8 p.m.

IHOP expanded the deal to all its flavors, which include four regular milkshake flavors — chocolate, strawberry, Oreo cookie and vanilla — as well as seasonal offerings.

The promotion began after a TikTok user’s posting in May 2021 about actor Adam Sandler at a busy IHOP restaurant in Manhasset in Long Island, N.Y. Sandler later quipped on Twitter that he only left the IHOP because the restaurant’s all-you-can-eat offering did not apply to milkshakes. IHOP created Milkshake Monday in response.

You know what, @AdamSandler, you may be onto something here. In your honor, we’d like to declare May 10th, 2021 #MilkshakeMonday at IHOP. More sweet details to follow. https://t.co/Xx4XLmZIVq

“After last year’s viral TikTok gained national attention, IHOP listened to its guests by quickly tapping into the conversation and putting a spotlight on our milkshakes,” said Kieran Donahue, IHOP’s chief marketing officer, in a statement. “On Milkshake Monday, we know guests will leave IHOP with a satisfied sweet tooth, a sense of joy and a big smile on their faces.”

IHOP donated $1, up to $50,000 total, from the sale of each milkshake nationwide to Comedy Gives Back, which is a non-profit group that addresses the needs of the comedy community through crisis relief and access to mental health and chemical dependency treatment.

“Laughter brings us closer together, and we are grateful to partners like IHOP who have created a national holiday bringing joy to milkshake-lovers and comedy fans alike,” said Jodi Lieberman, co-founder of the Venice, Calif.-based Comedy Gives Back. “The donations from Milkshake Monday help us keep laughter alive and continue to support the comedy community. We’re so honored to be a part of, especially when things get more serious than silly.”