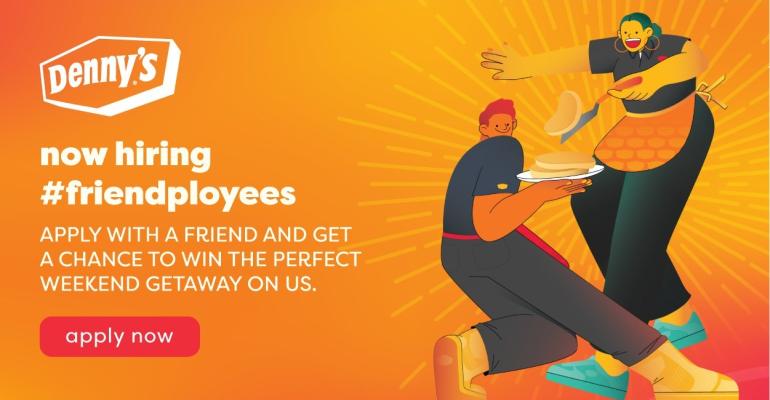 Denny's Corp.
Denny's launched its Bestie hiring campaign in May and June with a weekend sweepstakes.
News>Family Dining

While finding restaurant workers remains a challenge, Denny’s Corp. has found success with a campaign that doubles down on the effort, urging employees to take their “bestie to work.”

Spartanburg, S.C.-based family-dining brand has been working toward returning its restaurants to 24/7 hours, but the dearth of prospective hires has dragged down those efforts.

“We have a 24-hour brand, and this remains a significant tailwind,” said Kelli Valade, the new Denny’s CEO, on a second-quarter earning call earlier this month, “as demand for the late-night dining occasion is ever present and 24/7 restaurants are consistently outperforming limited-hour restaurants by mid-teen-digit sales comps relative to 2019.”

Enter the Bestie campaign, which a hiring twofer.

Valade said the “Bring Your Bestie to Work” hiring campaign was “unique and differentiated.”

“This clearly resonated and is working as evidenced by gained media impressions, increased applications and, most importantly, improved staffing in both company and franchise restaurants,” Valade said in early August.

The Bestie campaign was all part of an effort by Denny’s to hire 15,000 #Friendployees. It launched in May, and a contest through June 17 offered an expense-paid weekend vacation for the two friends ended in June.

Denny’s said at the outset that part of the reason was because “we know that friends who work together stay together.”

Gail Sharps Myers, Denny's chief people officer, added: "One of the great things we always hear from our restaurant employees is how much they love our friend-friendly working environment and the flexibility of working at Denny's.”

During the second quarter ended June 29, Denny’s worked toward returning more of its restaurants to the pre-pandemic 24/7 schedule. “We continued making steady progress on this initiative, and we're actively working with our Danny's franchise association,” she said. “Our new approach is to accelerate our return to 24-hour operations over the coming quarters.”

The Bestie campaign continues with the brand offering messages like “Apply with your bestie to join the Denny’s team today and become #Friendployees” on Twitter.

Apply with your bestie to join the Denny’s team today and become #Friendployees. pic.twitter.com/Y6jWPhdm5D

And on Instagram, the message is “If you’re with your bestie — is it really work? Yes, it is — it’s just more fun. Apply with your besties and enjoy flexible schedules.”

Valade said both turnover and wage-rate growth had begun moderating recently within the industry and at Denny's. “This is definitely encouraging,” she added.