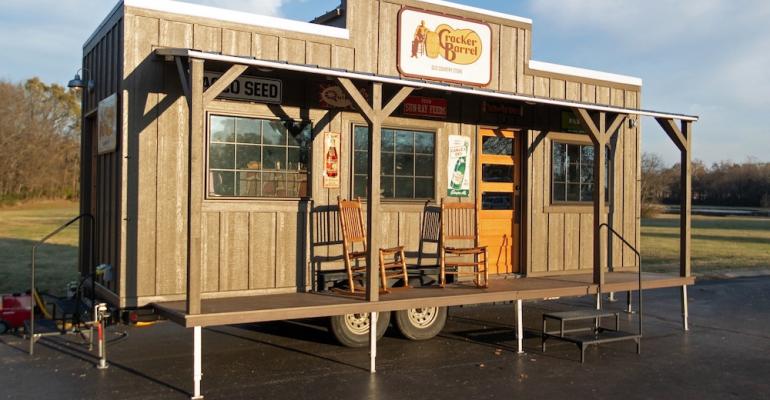 Cracker Barrel Old Country Store Inc. is celebrating its 50th anniversary by taking a tiny-sized store to the streets of New York before it launches its first sponsorship of a float in Thursday’s annual Macy’s Thanksgiving Day Parade.

"As we celebrate our golden anniversary, this is a big moment for Cracker Barrel, and we wanted to do something extra special to mark our first ever-appearance in the Macy's Thanksgiving Day Parade by creating a miniature Cracker Barrel experience that recalls the unique atmosphere of hospitality enjoyed by guests," said Jeff Sigel, Cracker Barrel’s vice president of marketing, in a statement.

The Lebanon, Tenn.-based family-dining company has no locations in New York City, so it’s taking its 269-foot “Tiny Home Away from Home” in Foley Square on Nov. 27.

The tiny store offers signature Cracker Barrel elements as the front porch with rocking chairs, a replica fireplace and a miniature retail store. The tiny store also features wood reclaimed from the first Cracker Barrel store, which opened on Sept. 19, 1969, in Lebanon.

The company and its affiliates operate 660 company-owned Cracker Barrel locations in 45 states and own the fast-casual Maple Street Biscuit Co. and Holler and Dash restaurants.