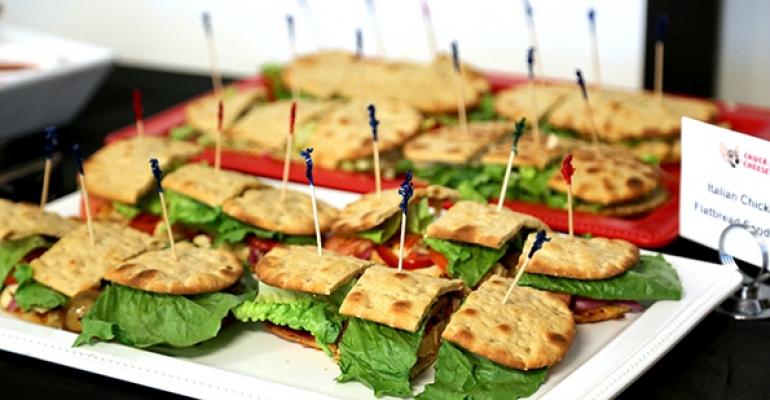 Thomas Leverton, CEO of Irving, Texas-based parent CEC Entertainment Inc., said in an interview that over the past year and a half, the company has crafted more adult options, such as California Alfredo Pizza and Barbecue Chicken Pizza with crispy onions.

“What we’ve been doing over the past couple of years especially is trying to address the mom and dad needs,” said Leverton, who has two children, ages 10 and 11, and has been CEO of CEC for two years.

Visits to Chuck E. Cheese’s don’t have to be a sacrifice for parents, he added.

“We’re a kid business — ‘Where a Kid Can Be a Kid’ — but we can make it better for mom and dad,” Leverton said.

Gregory Casale, senior director of culinary innovation for CEC, said the company is testing a number of items, including a new Giant Chocolate Chip Cookie in the Orlando, Fla., market, and upgrading existing offerings systemwide.

For example, Casale said that this month the brand is rolling out higher-quality chicken nuggets that are whole meat rather than processed and larger chicken wings. Casale is also testing expanding sauces, such as honey mustard-bourbon.

Leverton added that the company wants to make sure “no adult has to sacrifice anything from a culinary standpoint.”

To that end, Chuck E. Cheese’s has rolled out wraps and ciabatta sandwiches. Casale said that the chain is testing more healthful choices that are lower in calories, such as multigrain flatbread sandwiches in Italian Chicken and Chicken Caesar options. The company is also looking at a pizza dough for gluten-sensitive diners that is made from such grains as amaranth, quinoa and teff.

Leverton said the company is also addressing value as a component of increasing customer frequency.

In March, Chuck E. Cheese’s debuted a lunchtime all-you-can-eat buffet priced at $3.99 for children and $5.99 for adults.

In the Dallas market, the brand is also testing Half-Priced Tuesdays, when the price of games in the evening is reduced.

“Our games are between 20 cents and 33 cents,” said Leverton, adding that the half-priced offer makes it convenient and inexpensive for a Tuesday night visit, when games are reduced to as low as 10 cents each.

The chain is also moving toward a proprietary PlayPass system, using radio frequency identification, or RFID, cards on bracelets to replace tokens.

“Tokens get lost and spilled,” Leverton said, and the cards can be registered and replaced if lost. “What we’re hearing from mom: ‘It’s clean,’” he added.

Hospitality and cleanliness are also being enhanced elsewhere in restaurants systemwide, he said.

“We have been investing a lot of time in retraining and in new cleaning products that are eco-friendly,” Leverton said, adding that games are wiped down every hour.

Units are also adding televisions for broadcast sports and wifi to appeal to Millennial parents.

Apollo Global Management LLC acquired CEC Entertainment in January 2014 in a deal valued at $1.3 billion. In October 2014, the company also acquired the 147-unit Peter Piper Pizza, a Phoenix-based concept that is similar to Chuck E. Cheese’s.

As of April 29, CEC’s system had 594 Chuck E. Cheese’s units and 141 Peter Piper Pizza locations in 47 states and 12 countries and territories.