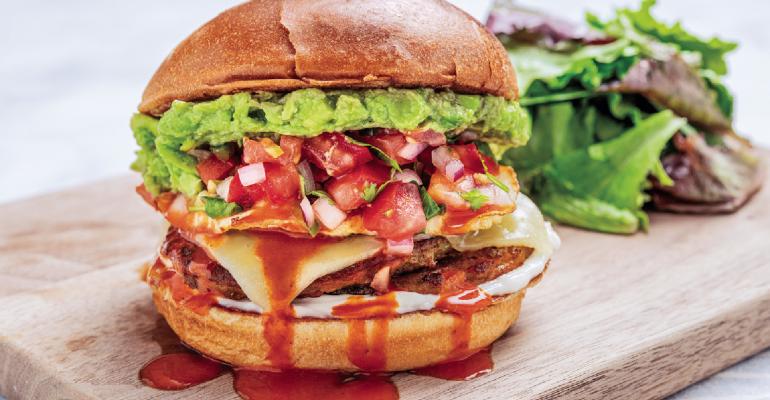 Breakfast returns to restaurants with healthy, spicy and indulgent options

As traffic grows, operators see demand during the morning daypart

Breakfast was hit hard by the pandemic as most people’s morning rituals were disrupted, but as with many aspects of the COVID-19 crisis in the restaurant industry, it ultimately sped up what was already happening anyway. A later, spicier and more culinarily diverse morning daypart was already being seen by trend watchers in early 2020, and as we potentially emerge from the pandemic, restaurants have spruced up their offerings with items that are photogenic, flavorful and give customers choices of richer or lighter items, plus a lot in between.

Although the morning commute that has been crucial to breakfast traffic is probably changed, and reduced, forever, breakfast is actually suited to the new normal: It’s extremely drive-thru friendly and requires little commitment in terms of time or money.

Related: Wendy’s continues to bank on breakfast, hitting 8% of U.S. sales in Q4

And people like it. Although the often-repeated claim that breakfast is the most important meal of the day has little science behind it, it does appear to be Americans’ favorite meal. Research by Merchant Centric, which analyzes customer reviews on websites including Yelp, Google and TripAdvisor, found that restaurant meals as a whole scored a monthly average of between 3.89 and 4.02 on a 5-point scale in 2021. Breakfast performed considerably better, at 4.14–4.28.

Merchant Centric cofounder Adam Leff said previous analyses for specific brands of these rating trends “have shown strong ties” to loyalty, frequency and higher sales. So an uptick in breakfast traffic or average checks is possible in the near future.

And, in fact, breakfast traffic did improve in February, with 5% more visits overall and a 6% increase in quick-service visits, according to consumer research from The NPD Group. Quick service accounts for a total of 88% of morning meal visits. However, that increase is roughly on par with growth in dinner traffic, which saw an increase by 6% too.

Breakfast was booming before the pandemic, outpacing the rest of the industry with 15% annual growth, said Erin Merritt, who works on consumer insights and analytics for The Coca-Cola Company.

She said that leading into 2020, breakfast was already shifting from an early-morning ritual to an all-day affair, and that there was a greater demand for spicy ingredients, global flavors and meatless options.

The Coffee Bean & Tea Leaf, in fact, kicked off the year with items that spoke to those food trends. The Los Angeles-based coffeehouse chain with more than 1,000 locations brought back a Beyond Breakfast Sausage Sandwich, first introduced in the fall, using Beyond Meat’s vegan sausage served on a toasted English muffin accompanied by an egg and melted provolone cheese. 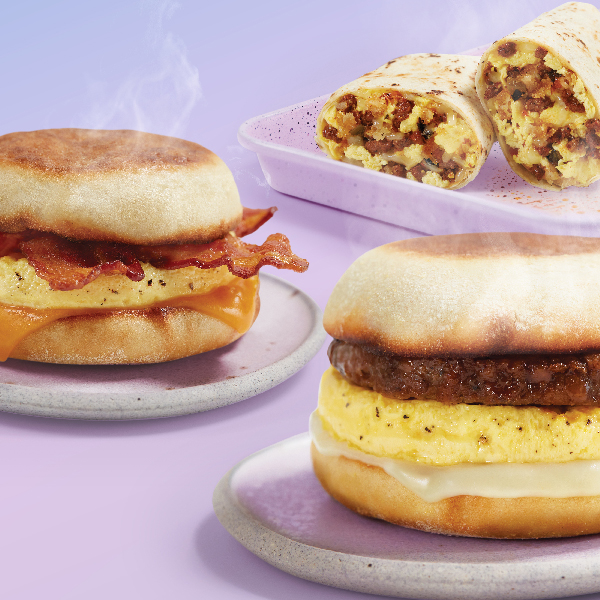 Photo: The Coffee Bean and Tea Leaf in January launched a breakfast sandwich with plant-based-protein and a chorizo burrito, as well as a bacon egg & cheese English muffin

The breakfast sandwich was just the latest in breakfast options featuring plant-based protein by chains. Last year, Jamba, Caribou Coffee and Peet’s Coffee all added plant-based breakfast sandwiches to their permanent menus, as did Philz Coffee, a San Francisco-based chain with around 60 restaurants. Jamba’s sandwich has Impossible Foods’ meatless sausage, while the other three feature Beyond Meat’s Beyond Breakfast Sausage.

Dunkin’ and Tim Hortons also have offered breakfast sandwiches with plant-based protein, and Starbucks has an Impossible Breakfast Sandwich on its menu.

As for global flavors, Hispanic flavors in general and Mexican ones in particular “have become so widely expected and mainstream,” said Shane Schaibly, corporate chef of First Watch, a breakfast, lunch and brunch chain based in Bradenton, Fla., with more than 435 locations. 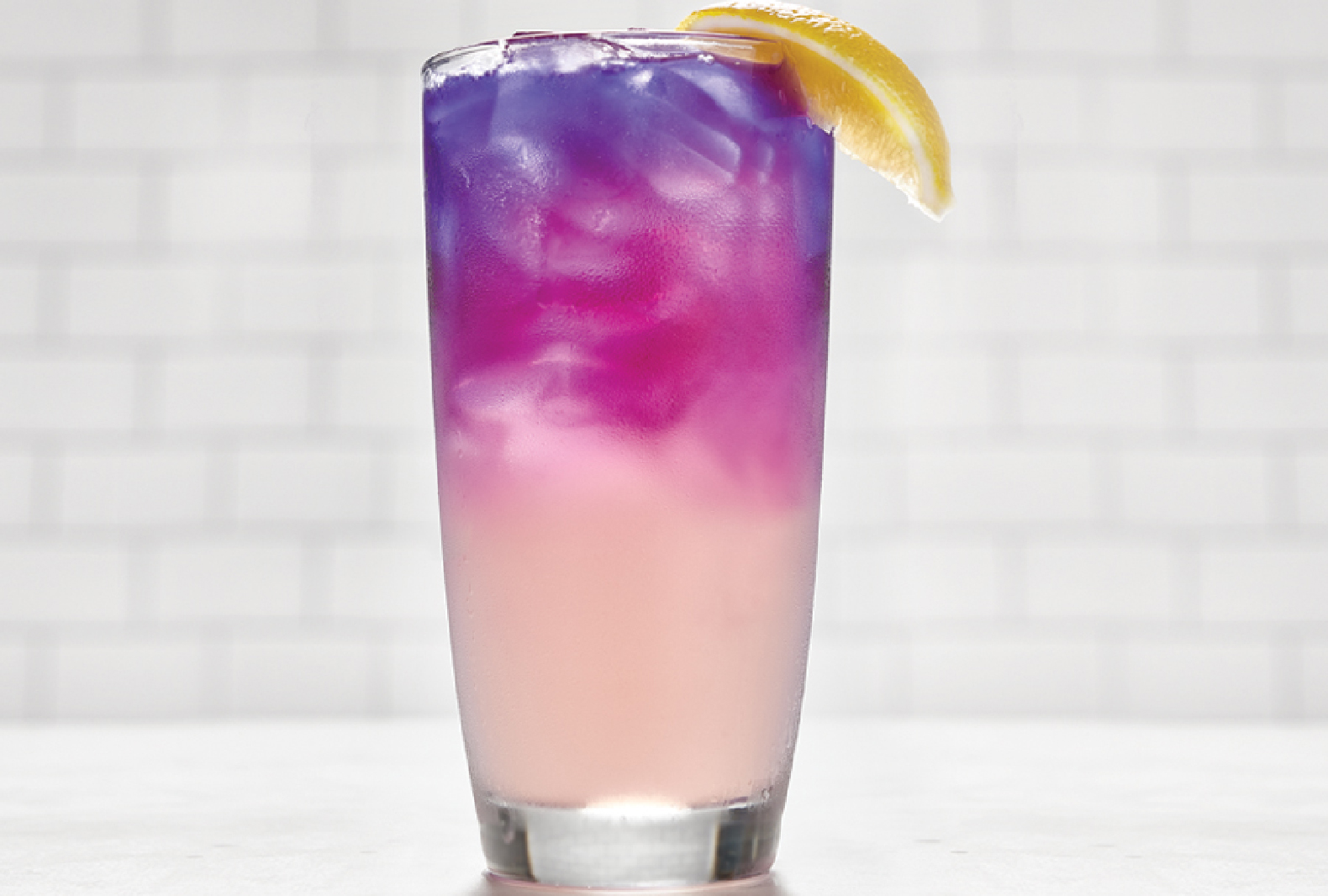 The attractive Purple Haze, a lavender lemonade with butterfly pea flower, has made it to First Watch’s permanent menu

“Five, six, seven years ago, that was still a little edgy,” Schaibly said. “When you read a word like ‘barbacoa’ or ‘carnitas’ even, you didn’t know what it was.”

He credits a non-breakfast player, Chipotle Mexican Grill, with introducing the non-Hispanic world to that kind of food.

“Once Chipotle started bringing those flavor profiles to the masses, I really think it opened up the door for the rest of us to play in that space and not really worry about it,” he said.

Indeed, even family-dining chain Huddle House, based in Atlanta and largely operating its more than 300 restaurants in the Southeast, introduced a Spicy Southwestern Wrap (also available as a bowl) made with steak, pepper jack cheese, scrambled eggs, bacon, green peppers, onions, tomatoes and skillet potatoes topped with a spicy Southwestern sauce made with ancho pepper, lemon and paprika. It’s available side-by-side with the chain’s Homestyle Huddle Wrap (or bowl) made with bacon, sausage gravy, scrambled eggs, cheddar and potatoes. 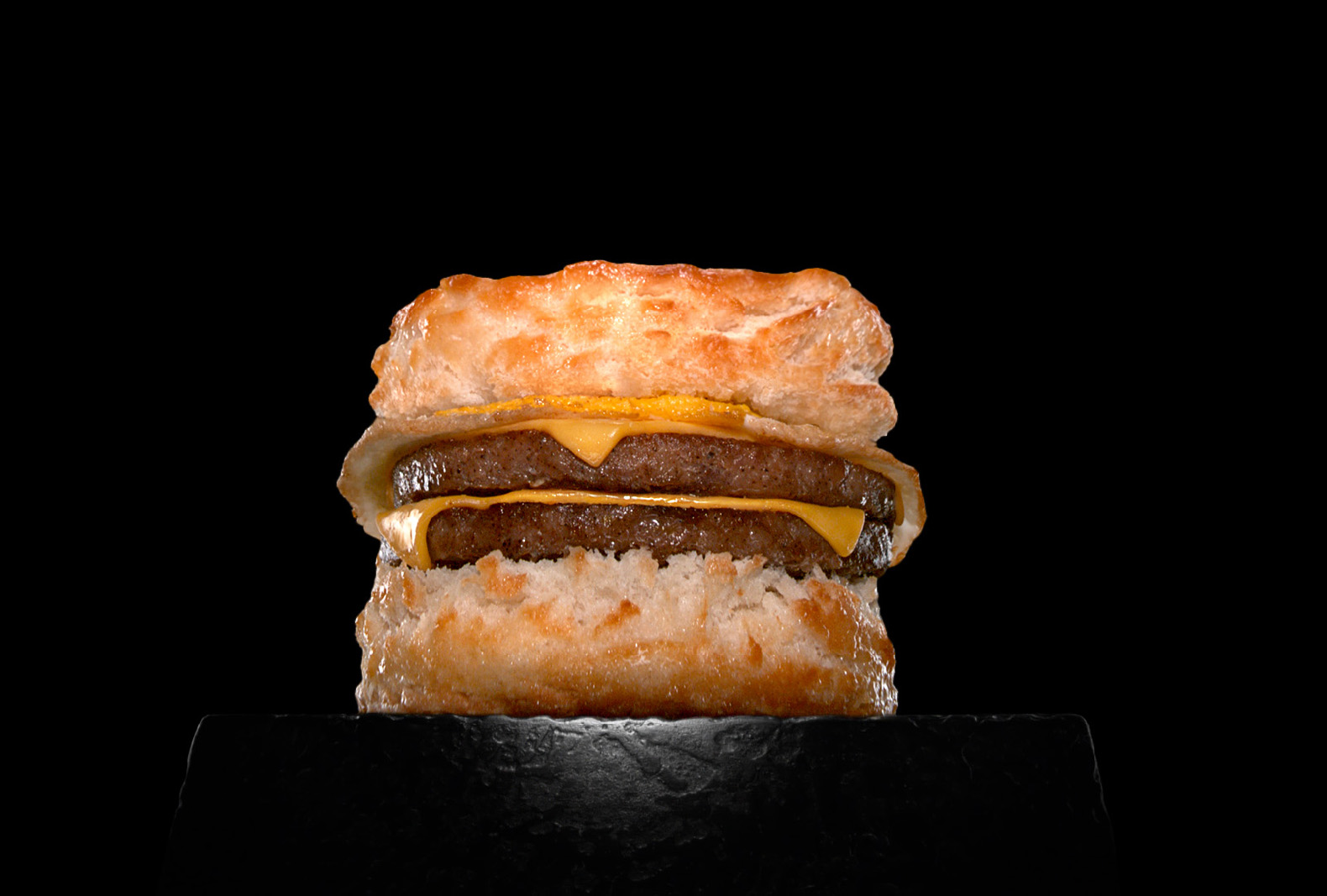 At Hardee’s Southeastern locations, the chain is leveraging ingredients that are already in-house by offering them in double portions with the Ultimate Sausage Biscuit, which has two sausage patties, two slices of cheese and a fried egg on a biscuit.

“We’ve seen a lot of success with our fried egg launches over the past couple of years and expect that to continue,” Klein said.

“Customers have really identified something comforting with fried eggs,” he added, noting that the fact that they’re cracked and flipped to order resonates with guests.

“The fact that we’re cracking back of house and cooking to order harkens back to a diner counter mentality, how a lot of people grew up eating breakfast. And it’s got a more wholesome look to it than any other egg out there,” he said, noting that each sandwich looks a little bit different.

Appearance is increasingly important at breakfast just as it is during other dayparts, said First Watch’s Schaibly, which is one reason that brand’s pretty purple lemonade, colored with the same butterfly pea flower tea that is popular in cocktails these days, has earned itself a permanent place on the menu.

He said Instagram has even made it into the breakfast space, which means it’s worth taking an extra 5-10 seconds to wipe the plates that go into the dining room.

“Traditionally that was not done at breakfast,” he said. “I fought really hard when I got here to convince everyone to put chives and parsley on every dish that goes out.”

The biggest breakfast launch going into the pandemic was at Wendy’s, which introduced the daypart at the beginning of March 2020.

Despite the incredibly bad timing, lunch has been a success at the quick-service chain of around 6,000 locations. Its sales mix has been as high as 8.5% of sales at U.S. locations — peaking during its Buck Biscuit promotion, when sausage or bacon, egg and cheese biscuits were $1. In 2021, breakfast sales at Wendy’s grew by around 25%, the company said, adding that they’re aiming to make breakfast 10% of total sales by the end of 2022 and expect weekly sales per restaurant during the morning daypart of between $3,000 and $3,500 by then. 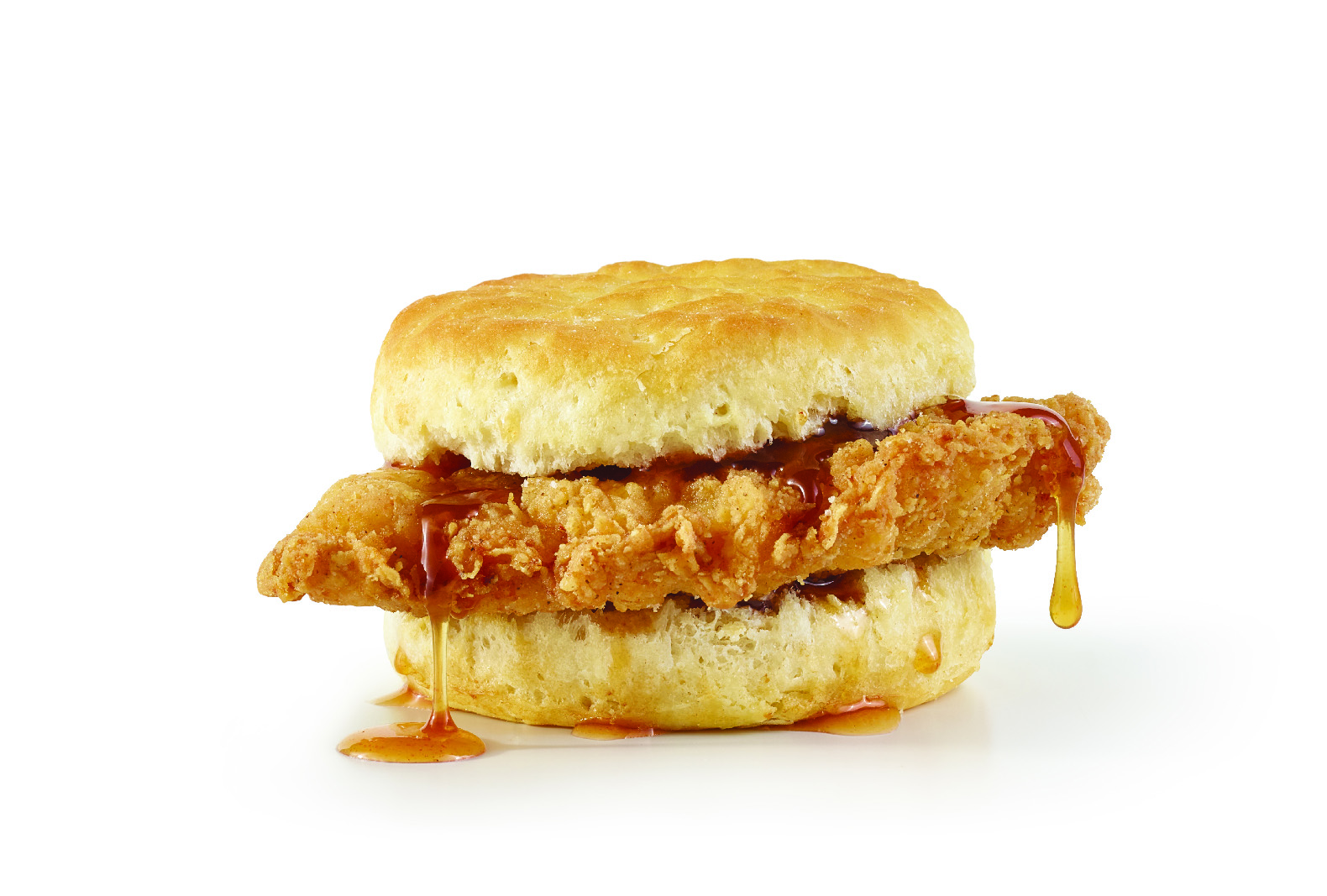 In February 2022, Wendy’s expanded its offerings with the Hot Honey Chicken Biscuit, leveraging the increasing popularity of sweet heat, particularly at breakfast.

Li said that, apart from the food, Wendy’s breakfast has succeeded because “we built a drive-thru daypart in what became a drive-thru world.”

He said Wendy’s also went from working with one third-party delivery company to four of them and also launched in-app delivery and nationwide curbside pickup, while also enhancing the chain’s grab-and-go platform.

Takeout food has to look good, too, said Schaibly, who set up plating guides for food that gets boxed up just as he has for food eaten in the restaurants. He said that other than items with sauces and butter that are packed separately, the to-go orders are placed so customers can dig right in.

That doesn’t mean the food all has to be low-fat, low-carb and no-flavor, he said. Items such as the Superseed Protein Pancakes that were offered at the beginning of the year were made with multigrain batter mixed with “Superseed Crunch,” First Watch’s blend of flax seeds, kasha, pumpkin seeds and sunflower seeds. They were topped with banana slices, blueberries, maple almond butter, vanilla Greek yogurt, more Superseed Crunch and warm mixed berry compote. That’s a lot of healthful ingredients, but they’re still pancakes and make for a hearty breakfast.

First Watch was founded in Monterey, Calif., and has a heritage of better-for-you items, but Hardee’s, with a very different history of indulgent ingredients on its made-from-scratch biscuits, also caters to the diet-conscious crowd: An off-menu item is the Low-Carb Breakfast Bowl made with double eggs, triple meat and double cheese.

“It’s apparently a hit with the cross-fit crowd in the Southeast,” Klein said. “It’s really good.”