Biscuit Belly capitalizes on brunch trend with its menu and environment

The brand first opened in 2019 and plans to accelerate its growth through franchising and joint ventures next year.

Chad and Lauren Coulter are both pharmacists by trade, but they experienced the “entrepreneurial itch” in 2011 after moving to Louisville, Ky., and jumped into franchising to feel out the trials and triumphs of business ownership.

They opened two Uptown Art locations, which is where patrons can paint and drink, and they sold a lot of wine — enough wine to inspire the creation of their first proprietary brand, LouVino. The Southern-inspired small plate restaurant and wine bar was launched in 2014 featuring a menu created by Chef Tavis Rockwell. It quickly grew to five locations in three different states, but it wasn’t an easily scalable model, according to Chad Coulter, because every location had different menus and different wine lists.

Still, the entrepreneurial itch persisted and, in 2018, the Coulters and Rockwell started Biscuit Belly.

“Tavis and I had always played around with this biscuit concept, and you could start to see (brunch) become an actual focus with several different businesses. We thought maybe this thing has legs,” Coulter said. 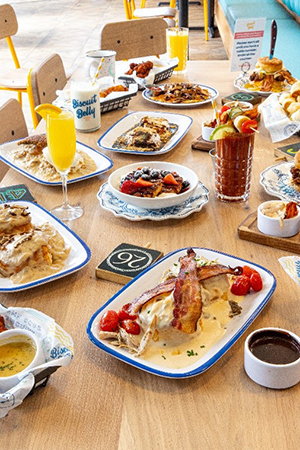 They brought on industry veteran and former Papa Johns executive Chuck Schnatter as a partner, and he “prevented us from doing all the wrong things early franchisors do,” Coulter said. Together, the team worked with a local branding company on the colors, the environment and the menu before opening the first Biscuit Belly near downtown Louisville in the spring of 2019.

“It went over gangbusters. It’s still our No. 1 location and does very well for us. We decided to pull the trigger on No. 2,” Coulter said. The wheels were in motion on this new “craft casual” concept, as Coulter calls it, but then the pandemic hit.

“We just went into survival mode, but it allowed us to refocus on what we felt our growth plans were going to be. Looking at unit economics and scalability and the hot space that brunch was and is, we felt franchising was the best way to go with the least amount of capital to grow the fastest,” he said.

In October 2020, Biscuit Belly launched its franchising program. The concept signed three deals worth about 15 total locations in 2021, all with multiunit operators. There are now six total units open — four corporate and two franchised — with eight to 12 expected to be open next year, both from franchisees and through joint ventures put into place in the Virginia Beach/Chesapeake, Va., and Raleigh, N.C., markets. Coulter said there is interest in Charlotte, N.C., and Florida as well. Driving much of the growth is the general interest in boozy brunches popularized recently by millennial consumers in big cities.

“You look maybe 10 years ago and prior — and not knocking on these guys at all, they’ve been very successful — it was your big family-friendly chains like Denny’s, Waffle House, Shoney’s. I don’t know if those really speak to the younger generation. People are looking for a more hip environment to be in, they’re looking for booze, they’re out celebrating something. Not that it didn’t exist at all, but it wasn’t at the forefront,” Coulter said. “Over the last 10-ish years you start to see the advent and growth of First Watch and more local spots that have expanded, and it’s become a thing. Obviously, there’s demand there.” 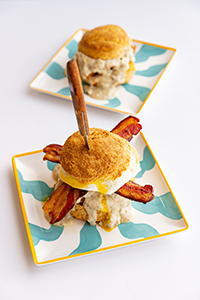 Biscuit Belly is trying to capitalize on the trend with both its menu and its atmosphere. To get an idea of the former, Biscuit Belly’s signature Rockwell breakfast sandwich features buttermilk fried chicken breast, cheddar cheese and goetta sausage gravy.

“If you look at the three hottest segments right now, everybody’s getting into fried chicken; brunch is really hot; so is the fast-casual format. We combine the three of those. The primary thing we’re doing is fried chicken on a biscuit in some sort of form. We have a full cocktail list, so we’re also getting the boozy brunch and having fun with that,” Coulter said.

Having fun is the continued goal as the concept sets on a growth path. Coulter said the Southeast is the priority target for expansion to maintain that made-from-scratch scalability. Eventually, Biscuit Belly may grow deeper into the Midwest. Coulter said the concept could get to 30 or 40 locations in two years.

“We’re not trying to push a bunch of deals. This needs to be the right person, the right location, how much time are they going to dedicate to it?” Coulter said. “This is our first normal year. We’re still very much building the car while we’re driving it. We will continue to become better operators, marketers and better overall. By next year, we’ll have our systems down pat and be able to really accelerate growth at that point.”