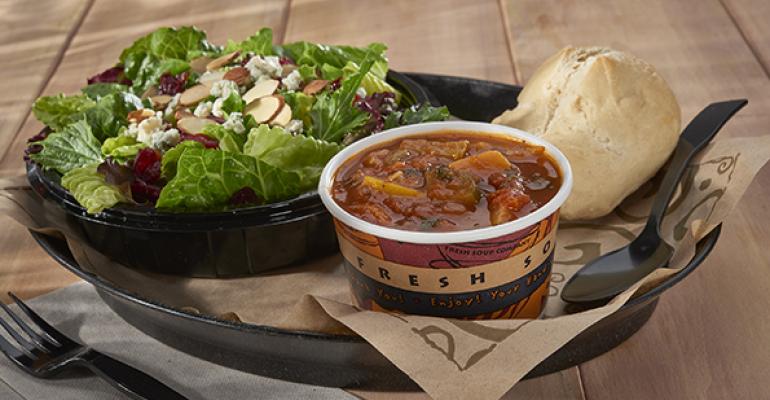 Zoup!, the Southfield, Mich.-based soup concept, has always avoided fast growth. It has 81 locations, and its plans are to grow with the right type of franchisees, in areas where it already has a presence.

“We’re continuing to do what works well for us,” said Eric Ersher, co-founder and CEO of the fast-casual concept. “We are not one of those super-fast-growth companies. We are almost 17 years since we founded Zoup! We want to continue our very deliberate growth.”

Still, the growth is speeding up. The company expects to add another 11 locations this year, which would give it 92 units. Operators have committed to open another 30 locations that have yet to open. The company’s locations are largely in the Northern U.S. and in Canada, and that’s where it will open the new units.

That growth could be backstopped by consumers’ evolving tastes and increasing interest in health and wellness. “I think the brand is consistent with consumers’ changing preferences,” Ersher said. “We’re able to provide a lot of variety. We have healthful choices — and the appeal of familiarity and comfort, while at the same time unique recipes and flavors.”

Ersher helped found Zoup! in the late 1990s, when he was working as a wholesaler, often selling soup to restaurants and foodservice companies.

Soup, he said, was a popular item. It also elicited a connection with customers. Everybody, it seemed, had a soup story. “When we were in the soup businesses, people would want to share stories or recipes, from their grandmother or their childhood,” Ersher said. “Soup elicited thoughts of comfort and well being.”

Yet soup was an afterthought in the restaurant, he said, a use for leftovers and other ingredients. “Really good soup was hard to find,” Ersher said.

So Ersher and his partners raised some money, hired a chef, and set to the task of developing soup recipes. Hundreds of them.

Before the first location opened in Southfield in 1998, friends and family were then invited to tastings on weekends at a commissary of a closed GM plant in Michigan for a full year.

At the same time, Ersher had to figure out how to develop and operate a restaurant chain over the course of those 12 months. “The reality was, during that period of time we were also doing business planning,” Ersher added. “We were doing all the preparations required to go into a business that we knew nothing about. We don’t come from a long line of restaurant folks. There are not a lot of models for us. We were trying to figure things out.”

With a menu of hundreds of soups, the company ultimately developed a plan and started opening company locations. It opened the first in Southfield in 1998. It then opened another four company locations (it currently has two) to see what worked and what didn’t work before it started franchising in 2003.

Twelve different types of soups are rotated in and out daily, so the menu is never the same. Each soup is served with freshly baked bread. Some of the soups are seasonal — gazpacho in the summer, for instance, or holiday-related soups in the fall and winter.

Shortly after opening its first restaurant, Zoup! added salads and sandwiches, to give customers some extra options.

Those new menu options were added at the request of customers. “We have always been very focused on customer comments,” Ersher said. “We reply to customer comments within 24 hours and have a database. Those comments really do drive and direct a lot of our decisions.”

Franchise owner Colleen Hopkins first got into the Zoup! business in 2011. A former accountant, Hopkins was deciding what to do with her career in 2009, when she got the idea of a restaurant. Someone suggested Zoup!, she loved it, and took the plunge, she said. In April 2011, she opened her first location, in Westlake, Ohio, about 10 minutes west of Cleveland.

“The first store took off really fast,” Hopkins said. “Customers love the concept. They love the soup, and I picked a great location.”

Hopkins, currently working on opening her third location, said that the uniqueness of the concept helps drive sales. “There’s really no concepts like it, at least in my area,” she said. “There are concepts like Panera that have soups. But nobody has 12 soups that rotate daily and let you sample them. It’s definitely a unique thing.”