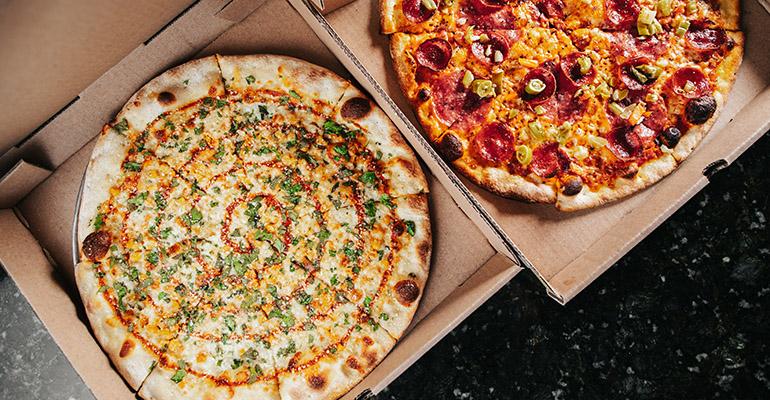 The Elote Pizza, left, is topped with corn and inspired by the Mexican street food.
News>Emerging Chains

Zalat Pizza — a play on the phrase “Pizza Zealots” — is a Dallas-based regional pizza chain with a penchant for quirky toppings like pickles and hoisin sauce (though not on the same pie) and maintaining pizza quality even as it scales relatively quickly for a small brand.

Zalat has more than doubled in size over the past 18 months, to 13 locations as of mid-August, with six or seven more planned by the end of 2021, mainly in the Houston area. And the brand is doing it all without plans to franchise or sell the company.

“We can never forget that it always comes down to the first bite of your food,” Zalat founder Khanh Nguyen said. “If the food quality is not there, you're just not going to do well. … Our limiter for expansion is not a timeline that's controlled by a private equity firm; it's just our own internal timeline bound by the limits of our ability to replicate our food quality. We will run as fast as we can, but the moment that we think that that's ever at risk, we'll pump the brakes.”

Join us in Denver Oct. 4-6 for CREATE: The Future of Foodservice, to hear from Khanh Nguyen live.

The first Zalat Pizza opened in 2015 and quickly gained attention as a late-night pizza spot for young customers in college or in their ’20s. Initially, when Zalat first opened, it started doing its own delivery — “Like you’re supposed to,” Nguyen said. But he quickly realized that he wanted to be in the business of making unique pizzas, not delivery. So, from then on, he relied entirely on third-party delivery service, leaving his “zealots” (staff) free to focus on making quality pizza.

“If you're trying to give a good experience to your customers, and it's a delivery product, even if you have 10 drivers on for the night, what happens when the 11th order comes up?” Nguyen said. “It puts so much pressure and stress on the entire restaurant … so I came to the conclusion that if we're worried about getting the delivery out, then we're not worried about our pizza, which should be our focus.”

This minimalist operations structure helped the concept thrive during the pandemic instead of suffer. Nguyen said he and his team “did not have to change much” when COVID-19 hit because they were doing the same thing they’d already been doing: off-premises service.

“Our footprint is only 1,500 square feet,” he said. “We were built for the pandemic. The only thing that changed for us last year is that we accelerated expansion.”

Part of the company’s expansion strategy has been to take advantage of the popularity and flexibility of ghost kitchens, as several of Zalat’s newest restaurants are delivery-only, which helps to cut down on operational costs.

Nguyen is also aware that pizza was one of the hottest categories during the pandemic, especially for the larger national chains. For Zalat to thrive, he knew the quality of the food had to be top-notch and unique enough to stand out from the hundreds of other pizza options in the Dallas metro area.

“If you look at the chains and multi-units, there are sacrifices that everybody makes for the sake of consistency,” Nguyen said. “The caveat you always have is, ‘It's great food … for a chain.’ And in our model, we're built around being the exception to that rule.”

Nguyen feels confident enough in the quality of the food to flex his creative muscles and offer pies like Nashville Hot Chicken pie (that’s where you’ll find pickles as a topping) and Elote Pizza (topped with corn and inspired by the Mexican street food). Even the regular pepperoni pie is made with beef instead of pork.

“We tell our zealots that we need our pizzas to be handled as if this were a five-star restaurant,” he added.

Nguyen said it’s important for staff to be skilled in making high-quality pizzas, not just to stuff the same cookie-cutter product in an oven. In return, he said, Zalat offers competitive pay, a supportive culture, a 401k plan, stock options, and full health benefits. After one year with the company, employees are offered a complimentary tattoo with a superman logo-style “Z” — a bonus that many employees have accepted.

Over the next year and a half, Zagat will mostly grow in the Texas region, with plans to expand to San Antonio and Austin. From there, it will move to adjacent markets like Oklahoma and Louisiana. Over the next three years, Nguyen wants to begin expanding more nationally “just to prove our case that we're not regionally bound,” he said, though the heart of the brand will always be Texan. One day, Nguyen said, he hopes that the company will go public.