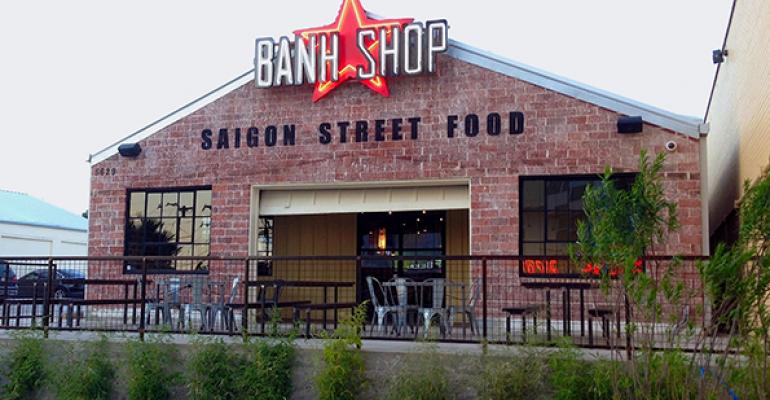 On Friday Yum! Brands Inc. will debut the first of two Vietnamese-inspired fast-casual sandwich shops to be tested in the Dallas area, according to the company.

The opening of Banh Shop, which will serve Vietnamese banh mi sandwiches, will be followed within a month by a second location at Dallas/Fort Worth International Airport’s Terminal D.

Louisville, Ky.-based Yum has been testing a variety of new concepts this year. The parent to the quick-service Taco Bell, Pizza Hut and KFC brands launched a new chicken sandwich concept in April called Super Chix in the Dallas suburb of Arlington. Its Taco Bell Corp. division debuted the fast-casual U.S. Taco Co. and Urban Taproom in August in Huntington Beach, Calif.

Executives said the time is right for an Asian sandwich shop.

“With Southeast Asian cuisine growing in popularity in the U.S., we saw an opportunity to design a unique fast-casual concept that emulates delicious Saigon street food, with a focus on the Vietnamese banh mi sandwich,” said Christophe Poirier, the Yum executive leading the Banh Shop project.

Hear more about the concept's branding >>

Mark H. Brezinski, a consultant on Banh Shop and more than 10 restaurant projects in Dallas’ Trinity Groves restaurant incubator, said in a statement: “Banh Shop is our way of expressing the abundance of bold flavors of Vietnam and parts of Southeast Asia with a tightly focused menu.”

“We’ve incorporated updated technology touches and a forward-thinking design scheme,” Brezinski said. “And most importantly, we all have the same vision for the food.”

Braden Wages said he and Yasmin were “irresistibly drawn to this cuisine and are constantly amazed by the combinations of bold, complex flavors and aromas these foods generate.”