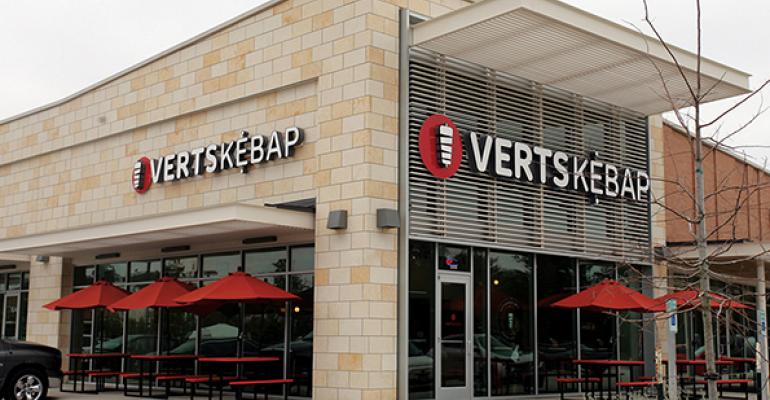 VertsKebap Inc. has acquired $20 million in private funding and plans to expand in 2016 from its Texas base to the East Coast, the company CEO told Nation’s Restaurant News.

The Austin, Texas-based concept, which was founded in 2011 and has 26 fast-casual, Mediterranean-inspired restaurants in four Texas cities, is seeking sites in Boston, New York and Washington, D.C., said Michael Heyne, co-founder and CEO, in an interview Friday.

“We have always privately funded our company,” Heyne said, “and we have created a network of professional private investors who are family, entrepreneurs, lawyers and consultants. We enjoy having this network around us to provide a very diverse set of questions.”

Heyne and his co-founder Dominik Stein, who serves as VertsKebap’s chief financial officer, have backgrounds in banking and management consulting. “We didn’t need early-on input from capital firms,” he said. “We want to wait on engaging a strategic or financial investor until we’ve shown proof-of-concept on another level. We’re interested in it, but so far we haven’t met the right fit.”

This round of funding includes investors both from the United States and Germany, he said.

Heyne and Stein founded VertsKebap, which features döner kebap with various sauces and preparations, in 2011, when they were students at the University of Texas-Austin.

Döner kebap was imported by Turkish immigrants to the VertsKebap founders’ native Germany, where it became a popular street food. It is made with thinly sliced rotisserie meats, vegetables and sauces. VertsKebap has updated the concept with beef, lamb, chicken and falafel options, allowing customers to choose kebap on bread, as a wrap or on salad.

VertsKebap has units in the Texas cities of Austin, Dallas, Houston and San Antonio. Heyne said VertsKabap is in contract negotiations on some early sites in the Northeast, but the company has not yet signed for any locations in the three cities.

“We’re actively looking in all three markets,” he said, adding that the Northeast is competitive in fast casual and offers dense populations.

Heyne said that equally important to the new funding is the recent addition of an executive chef to the concept.

Jason Donoho has been hired as VertsKebap’s first executive chef and culinary director. Heyne said Donoho, who previously was with Alamo Drafthouse, will look at expanding menu categories beyond the signature döner.

Prior to Alamo, Donoho served as executive chef at Fino Restaurant Patio & Bar and Asti Trattoria in Austin.

Some other platforms include having a rice bowl as a base for the kebab meats, he added.

VertsKebap is building a test kitchen at its original Austin restaurant, near the University of Texas campus. The test kitchen will allow guests to sample new items before they are added to the restaurant menus chainwide, Heyne said.