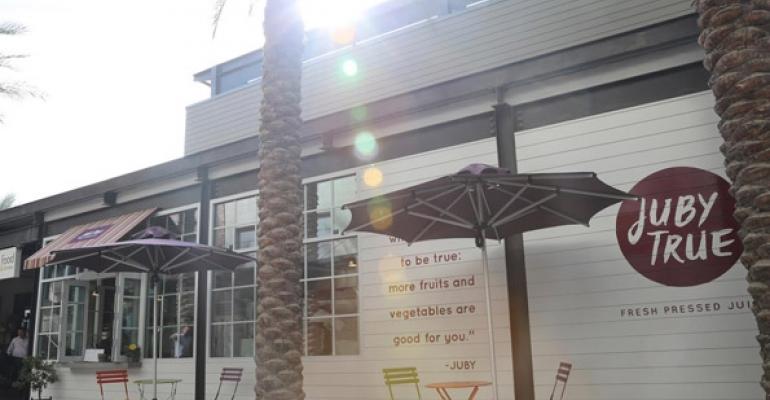 Phoenix-based Fox Restaurant Concepts, which has 40 restaurants under a number of brands, said it will expand Juby True, which stands for “Juice by True.” The operator will expand the concept as standalone units and adjuncts to the operator’s True Food Kitchen units. The first Juby True opened in October next to a True Food Kitchen in Scottsdale, Ariz.

“When we first opened True Food Kitchen, we recognized the need for restaurants that offer nutritious food that also tastes good,” Fox said in a statement. “We instilled the same philosophy in Juby True, but this time in a portable, convenient cup.”

Juby True serves cold-pressed juices for $9, made in house and bottled to go. The menu also features protein blends and smoothies for $8, water-based “hydrators” for $7, “juice boosts” for $4, coffees and teas ranging from $2 to $6, and gluten-free, vegan and paleo-friendly snacks priced between $3 and $4. And recognizing the popularity of packaged “cleanse” juice programs, Juby True also offers one- and two-day packages for $50 and $99, respectively.

The company said fruits and vegetables for the juices are sourced from local and regional organic farms when possible.