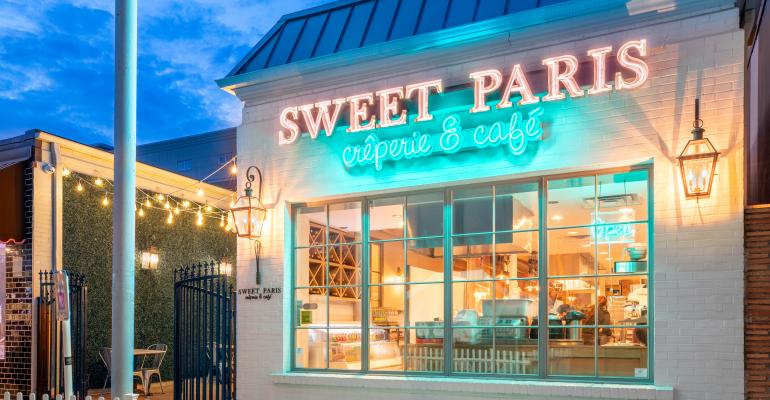 Sweet Paris is the creperie with a Paris café feel and Texas-sized crepes, at least according to co-founder Allison Chavez.

With its first foray outside the state of Texas in the brand’s 9-year history, Sweet Paris is getting ready to take its Texas-sized crepes to Miami with the recent announcement of four new locations in the 305.

Why branch out from Texas, where the chain has 10 locations, to Miami?

“We went to Miami and really felt like the energy demand for restaurants was just bustling,” Chavez told Nation’s Restaurant News.

Sweet Paris joins the growing list of restaurants to make the move to Miami during the pandemic, inspired by the open regulations around COVID and the mass exodus of people heading South for the weather.

Nothing will change about the restaurant at these four new locations; it will still serve Texas-sized crepes… just in Miami. But what makes the chain think it can survive in Florida?

Well, Chavez says it has the infrastructure online to propel it to success.

The fast-casual chain was inspired by her time studying abroad in Paris during college. Chavez and her husband Ivan were craving crepes one day in Houston and decided they could make them better than the current market.

Both were in the finance world – not the restaurant industry – when they decided to open Sweet Paris in 2012. To their surprise, the original location near Rice University in Houston was an instant success and the team had to remodel just six months after opening to accommodate more guests.

“We had planned for a very quiet charming opening that was very slow…we realized that people wanted their Texas-sized crepes and we needed to deliver quickly,” said Chavez.

The Chavezes had to learn fast on their feet when it came to running a popular restaurant, but they had the benefit of a new form of social media: Instagram.

Marketing and communication were natural for the new brand as people began to share the plates of food at Sweet Paris on social media, bringing customers there through word of mouth and via the app.

Chavez and her husband didn’t even have to put out a formal ad campaign.

“A lot of our marketing and communications just happened naturally from our customers…But we have made sure that the presentation was also beautiful every time. That was a big, important part as well,” said Chavez.

This is something they have embraced as the brand has grown and aged. Plates of food are made to be photographed, food shots shared and each store – while unique ­– is designed to be displayed on a social media feed.

The brand calls itself “The [world’s] ‘s most beautiful & delicious crêperie” and boasts almost 29,000 followers on Instagram.

This has helped Sweet Paris grow during the pandemic while other restaurants were forced to close. Not only did the chain sign four leases in Miami for 2022 and 2023, but it has opened three locations in Texas during the past 20 months.

“We’ve been really lucky that part of our footprint requires a patio,” Chavez said of operating during the pandemic.

That, plus the weather in Texas, allowed the chain to maintain operations and even expand.

“We have a lot of flexibility. We have a very reasonable price point and we provide an elevated experience; at least that’s what we strive to do. So yeah, we think that [Sweet Paris] will do well [in Miami],” Chavez said.

Two of the Miami stores will be owned by Sweet Paris’ chief development officer Ivette Escobar while the other two will be corporate stores.

“It gives us a lot of comfort [that] someone from our home base who lives and breathes Sweet Paris is going to be part of that development,” she said.

That’s on top of a three-unit deal the brand just signed with Ludovic Le Gall and Yi Wang, current Sweet Paris franchisees, in Dallas. Within the next few years, the 10-unit chain will be increasing by 7 stores to almost double in size.

“We are so excited to transport guests in Dallas and Miami to our beautiful and delicious world of crêpes,” said Chavez said in a release at the time of the announcement. “With our existing presence in Texas, Dallas will be a natural next city for expansion, and Miami will be the perfect market to begin growth in Florida with its diverse population and vibrant restaurant scene. We look forward to supporting our Strategic Partners in their entrepreneurial journeys and hope that this is only the beginning of a national revival of the art of eating crêpes.”

According to the company, the total investment range to open a Sweet Paris franchise is $753,000 - $990,600 with an average unit volume per restaurant of more than $1.7 million.