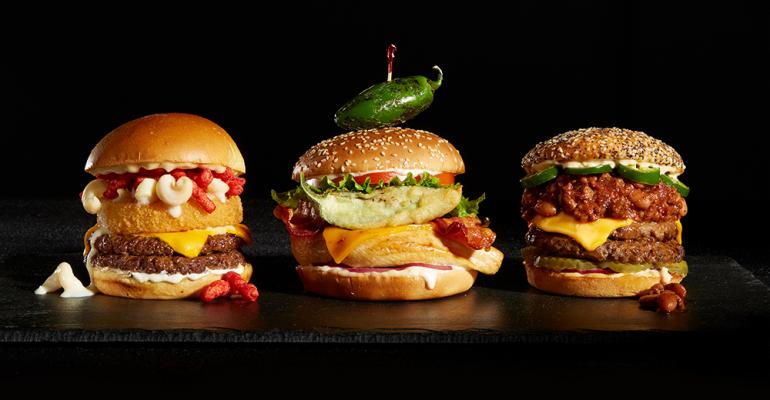 While operating under the banner of the Norms business, the six kitchens used — Costa Mesa, Whittier, Carson, Torrance, Riverside and Van Nuys — were chosen through consumer research by the team to serve the largest Norms audience.

Earlier this year, the executives at Norms launched Norms Junior, but that was a pre-pandemic move in spite of its opening during the pandemic. The idea for Zombie Burger Co. came about entirely as a reaction to new consumer habits during the COVID pandemic.

The 24/7 diner chain decided to embrace off-premise while California’s indoor dining restrictions remain in place for the foreseeable future.

Zombie Burger Co. uses existing staff and equipment in established Norms kitchens and takes advantage of known partnerships with third-party delivery providers, meaning many of the largest hurdles for virtual brands were already crossed from the beginning.

After some consumer and data analysis, Norms decided to venture into the virtual-brand world with their own burgers at a reasonable price point. Burgers, including double-stacked patties, range from $9.99 to $12.99.

The name was partially inspired by the planned Halloween launch but mainly by the owners and chefs discussing what they wanted to make. Burgers were deemed the food choice after some research & development, but the name had to show off the food they were going to make. With an aim of making “killer burgers,” the staff decided to jump on the dead/undead theme and go with Zombie Burger Co.

Aimed at expanding the market, Zombie Burger Co. says it targets Millennials and Generation Z but also “all folks that are utilizing delivery services which includes senior citizens…because they may feel a little vulnerable going into a restaurant.”

Part of that reach includes “killer” photos on digital menus and third-party platforms to draw viewers into their food when they have every option to pick from in their own homes.

“The key is to get that first look, that first click. Once they get into that through our photography and our explanations, we think we'll get the order,” said Colonna.

The menu follows the theme of “killer burgers” with names like the “Screeching Sriracha Mac n Tots,” which is tater tots topped with aged white cheddar mac and cheese with sriracha and green onions; “The Screamer,” which is any protein topped with American cheese, mac and cheese, an onion ring and Flamin’ Hot Cheetos; and the “Don of the Dead,” which is any protein topped with house-made chili, American cheese, red onion, pickles, “Zombie Sauce” (the brand’s own secret-recipe sauce) and fresh jalapeños.

The reasoning behind tots over fries was portability — and the benefit that they can handle some heavy toppings.

“We wanted to move away from French fries, because tots travel much better and they hold up well when you put the stuff on like Cheetos and macaroni cheese and chili,” said Colonna.

Click through the gallery for some insight into the new virtual brand.