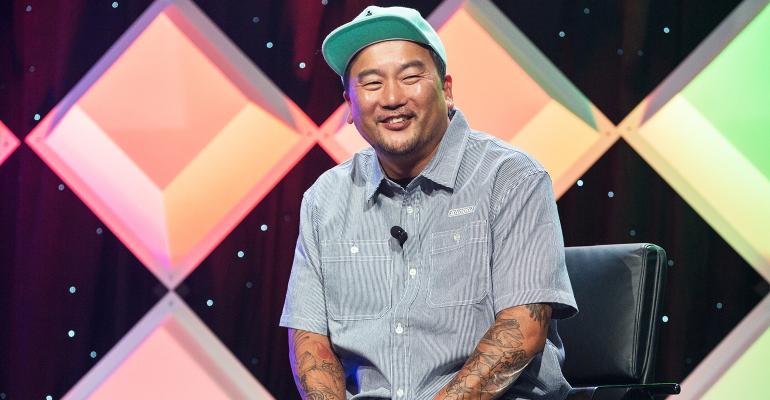 Third unit to open in Whole Foods Market next week

Los Angeles chef and restaurateur Roy Choi started 2018 with a bang, announcing plans for a new concept in Las Vegas for the first time and a new line of sauces and seasonings at Williams Sonoma.

But even bigger news for Choi this year is about his quick-service concept Locol, which he opened in partnership with San Francisco-based chef and restaurateur Daniel Patterson. The concept is a closely watched experiment of sorts, designed to bring affordable and more-healthful fast-food — and good jobs — to underserved lower-income neighborhoods.

Next week, the third location for Locol will debut at a Whole Foods Market in San Jose, Calif. And the existing locations in Los Angeles’ Watts neighborhood and West Oakland, Calif., will reopen after about a month of being closed through the holidays.

Both stores got a refresh during the break and Choi said the team has streamlined the menu to focus on burgers and “foldies,” a taco/sandwich hybrid.

“We wanted to align all three outlets,” he said. “We kind of grew organically and they became their own thing. We wanted to become one holistic company, so all the menus will reflect each other. We wanted to go back to our core, which was being a burger stand.”

The break was also a time for Choi and his team to think about how to help Locol blossom in 2018.

“In the first two years, our goal was to figure the model out, to make it sustainable and to have it grow,” he said. The goal was to grow just like any other chain, but in a way that provides “not only profitability, but spiritual profitability. To enrich people’s lives.”

The concept is “very, very close” to profitability, he added.

Choi is working on using technology to create a “pay it forward” model that would allow supporters to buy meals for others.

“There are a lot of ways people want to support Locol, but they can’t make it to one of the stores,” he said. “We’re looking at ways of using technology to figure out how people could buy meals for young kids or families when you’re sitting in your office.”

Catering is also an opportunity, he said. Choi, who is famous as a food truck pioneer with his Kogi BBQ brand, operates two Locol trucks in Los Angeles and a catering van in Oakland. “Our truck has done really well in the past year, so we’re figuring out how to get out in the community more and get our team more jobs,” he said. “Some people can’t get to Locol because they’re at work. Now we can go to their work. So we created a bridge.”

Choi also sees potential in the partnership with Whole Foods.

“Now we can start using more organic ingredients, and we can expose our brand to an audience at Whole Foods Markets that really care. And so maybe that can go both ways,” he said. “Maybe we can give insight to where Whole Foods could start opening in neighborhoods where Locol is at. That’s really the long game for us.”

Choi said his conversations with Whole Foods in Northern California indicate that “one of their goals is to evolve beyond just being a big box market in affluent areas.”

“They’re dipping their toe and reaching their hand out as much as we are to them, saying ‘Come in our store, we know your mission, we believe in your mission,’” he said. “And, if it works out, we can open in more of their stores, or maybe by getting to know us and our community and workers and our mission, maybe they see a window open where they might be able to open in Watts or Compton or East Palo Alto and West Baltimore and South Chicago.”

Choi said he thought, in the beginning, Locol would be further along by now.

“We thought it would be more traditional, that we’d have five or six, and then we would franchise out, and those would mushroom into 15 or 25 by year five,” he said. “But what we’ve learned, and what we’ve lived, in the last couple years is that you grow in different ways. A tree sometimes grows in different ways, depending on the environment.”

“There aren’t many jobs. It’s the love and beauty of the people that keeps the dream alive, but the reality hasn’t changed much around us” he said.

“We’re just a small hamburger shop. We’re trying to grow like any restaurant is trying to grow, but there are a lot of things stacked against us,” he added. “You could easily be writing the story after Year One where we didn’t make it. But we’re going into Year Three, and I’m really proud of that.”