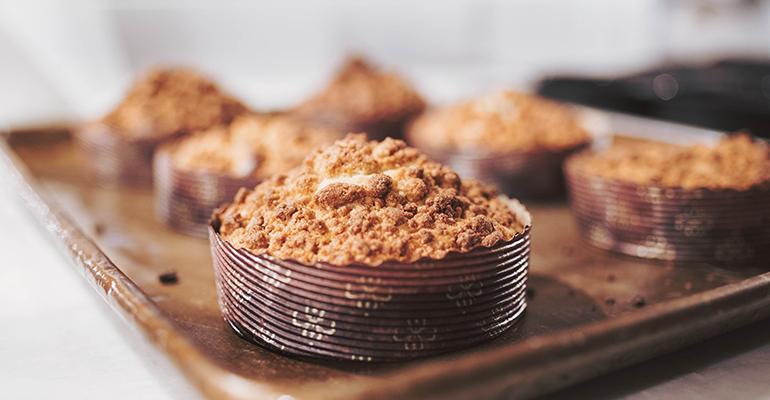 Specialty’s Café and Bakery Inc., based in Pleasanton, Calif., filed for Chapter 7 bankruptcy on May 27. At the time of closing, the chain had 41 leased units mostly in the Western U.S.

In its bankruptcy filing, the company blamed the COVID-related shutdown for destroying the chain’s niche market, which included operating near busy office parks. Since March, many workers are working remotely, leaving those office parks empty. Another company, Sparges LLC, purchased several other Specialty’s Cafe and Bakery units during the sale, according to court documents.

EllaMia will serve breakfast and lunch along with all-day coffee in collaboration with Lavazza. Chef Romain Fournel, formerly of Jean Philippe Patisserie in Las Vegas and Patisserie Henriet in Paris, designed the menu to include fresh-baked pastries, gourmet sandwiches, salads, macarons and chocolates. The locations will feature a grab-and-go case as well as community seating.

But the EllaMia locations will also serve as host kitchens for C3’s growing stable of virtual brands.

“Unlocking the value of underutilized real estate and creating opportunity in a hurting food service industry is key to the C3 model,” said Sam Nazarian, CEO and founder of C3. “The introduction of EllaMia along with three to six proprietary C3 brands in each individual location effectively means operating 100 distinct dining concepts in a third of the space required by a traditional restaurant.”

C3 brands that will utilize EllaMia shared kitchens and be available for delivery to the surrounding communities include Umami Burger, Krispy Rice, Sam’s Crispy Chicken, Plant Nation, LA Gente, In a Bun and The Other Side. Customers will be able to order from every brand in one order as part of the proprietary system at C3.

“A true restaurant of the future, EllaMia kitchens are each equipped to fluidly prepare foods from different C3 concepts to maximize efficiency of real estate and labor,” said Brad Reynolds, chief operating officer of C3, in a statement. "The added availability of different cuisine to accommodate varying consumer preferences is another benefit for each local EllaMia community.”

The restaurant chain will service Chicago and Seattle, as well as multiple communities in California, including San Diego, the San Francisco Bay Area, Sacramento and Orange County (Irvine and Costa Mesa). In addition, EllaMia locations with also open at major university campuses including Arizona State, UC-Berkeley, Iowa State, University of Michigan, University of Nebraska and University of Richmond.

In June, C3 announced 15 locations of new full-service Casa Dani in collaboration with Chef Dani Garcia along with 100 locations — including virtual restaurants —of quick-service Minük.

Lisa Jennings contributed to this report.