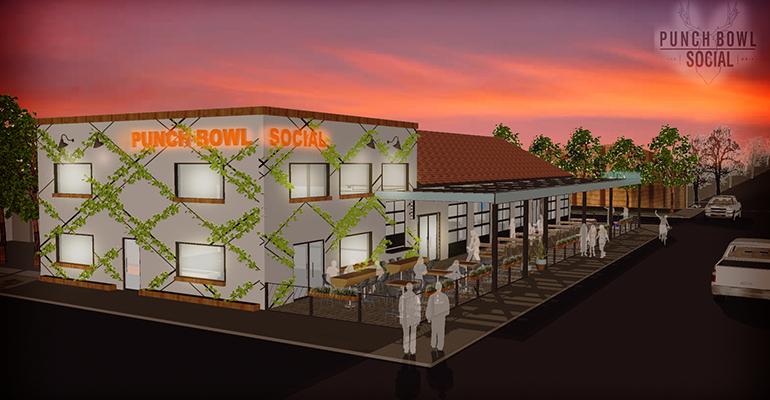 The 12,500-square foot location expected to open this year in Fort Worth

The 14-unit chain will be debuting a 12,500-square feet model, half the size of its typical stores.

Known for its entertainment —Skee-Ball, shuffleboard, bowling, and ping-pong — Punch Bowl Social will continue to focus on games in the new format.

“We give up the volume… but not any of the programs or the culinary service and craft beverage offerings. Most all of the entertainment, the social gaming program, is in place,” said Founder and CEO Robert Thompson in an interview.

The tinier format, launching in Fort Worth, Texas in December will have two bars instead of three, and the bowling alley will become duckpin bowling, a version of bowling using smaller, lighter pins.

“We struggle justifying the whole 25,000-square foot Punch Bowl Social investment in some of the smaller markets because we might not get the return on investment in those locations,” Thompson said.

“So we decided to figure out how to get our complete program into the smaller footprint which opened up all these markets across the country.”

Receiving an investment from private-equity firm L Catterton last year, Punch Bowl Social expects to almost double in size, growing from 14 locations to 25 in the next 18 months.

Most of the new locations opening over the next 18 months will consist of the larger layout customers have become accustomed to.

Larger locations are often built in repurposed buildings, but the smaller ones will give the company a chanced to branch out into other “quasi-urban” markets as well as add second locations to cities already housing a location.

“If we struggle to justify two 25,000 spaces in the same market there are some scenarios where I can envision seeing us using a small box to supplement a trade area. It allows us to fully develop a mid-size market between the two,” said Thompson.