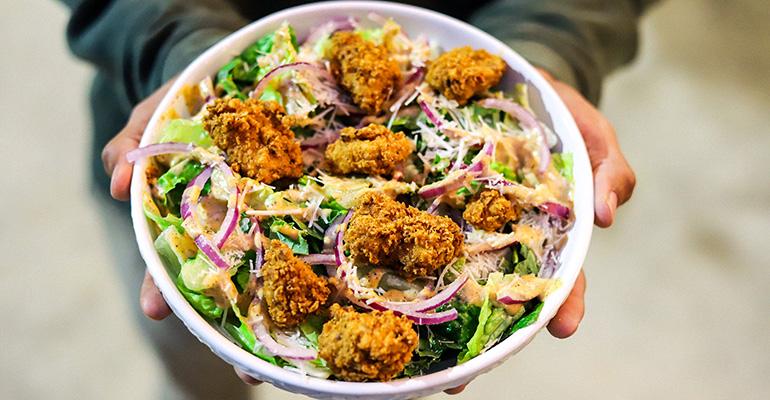 The Chikn Caesar is available as a salad or wrap.
News>Emerging Chains

A vegan entrepreneur has begun rolling out a new concept in Texas centered around offering a breaded, plant-based chicken alternative in sites formerly occupied by vacant quick-service restaurants.

Lucas Bradbury, who previously had experience running the restaurants of a convenience-store company that licensed several foodservice brands, including Dunkin and Which Wich, said he launched Project Pollo after encouraging his parents to try a plant-based diet for health reasons.

“A couple of weeks in, they were tired of cooking at the house and said, ‘We can't do this anymore. It's just too expensive,’” he said, citing the costs of buying salads and plant-based burgers in restaurants. 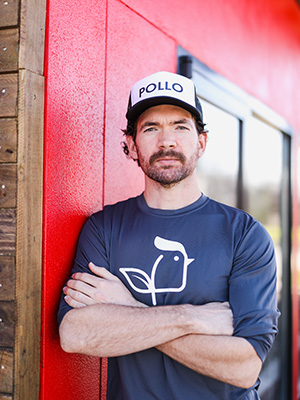 Photo: Lucas Bradbury sold his house to launch the concept, which is on track to open 12 locations in its first year.

Bradbury, who sold his own house to launch the concept, decided that Project Pollo would focus on delivering a product at a low price point with low overhead — hence his focus on second-generation restaurant sites. He launched the company last spring as the pandemic began taking a toll on the restaurant industry, and opened his first location in September.

The sixth location is slated to open in early April, and Bradbury said he remains on target to open one per month in the company’s first 12 months.

He has since taken on an additional investor to help fuel his growth plans, but he said the restaurants have been profitable almost immediately, and are generating enough cash to fuel expansion on their own.

“There are phenomenal second-generation spots from previous national tenants, such as Carl's Jr. and Church's Chicken and Jack in the Box, which are very expensive build-outs, and we're able to get into them for relatively low costs,” Bradbury said.

Project Pollo’s food offering centers around a unique, soy-based chicken analogue that Project Pollo recently began sourcing from a co-packer using a custom recipe. The chain had previously used a chicken substitute from Gardein, which specializes in plant-based meat alternatives.

The main menu includes four varieties of breaded Chikn sandwiches, including the Original Project, the Spicy Project, The Deluxe and the Pico de Pollo, along with wrap, a salad and Buffalo Chikn Strips. Sides include papas (fries), including two varieties of loaded papas, as well as a few varieties of mac and cheese. Cookies are available for dessert. Prices are about $7-$8 for sandwiches, and average checks are running about $31-$33 per order for loyalty customers and about $20-$22 per order for first-time customers, Bradbury said. 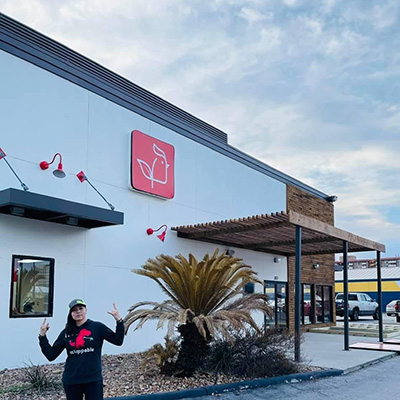 Photo: Project Pollo takes over second-generation sites of other concepts.

In addition, some special items are only offered on certain days on the main menu, including some sandwich and wrap variations and fried pickles.

Bradbury said he decided to focus on a plant-based chicken alternative because the most popular hamburger analogues, from Beyond Meat and Impossible Foods, are already ubiquitous on restaurant menus.

“Burgers would be the No. 1 choice, but there are a lot of concepts already doing it, and I really wanted to challenge the chicken system,” Bradbury said.

Because the company is adapting its concept to fit into various site configurations based on what’s available on the market, Bradbury said its build-out costs are averaging only around $50,000, compared with 10-20 times that to build a new location from the ground up.

About half of the company’s locations will have drive-thrus, Bradbury said. He is using data culled from his fledgling chain’s loyalty program to help guide site selection and determine the optimal sites for each market. The first five locations include four in San Antonio and one in Austin, and Bradbury hopes to expand into the Dallas and Houston markets by early next year. 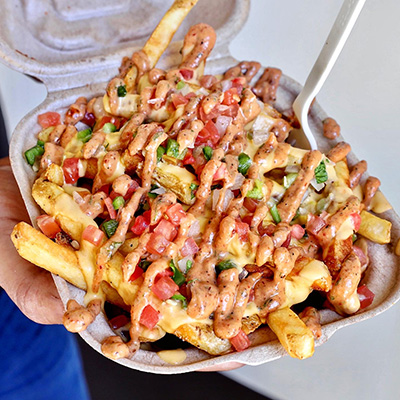 Photo: Loaded Fries are on the menu at Project Pollo.

“The model is turning second-gen spots into something that makes sense for us, and then putting all of those profits into our people,” Bradbury said.

Project Pollo pays workers $15 per hour with fully paid medical insurance and other benefits, after a two-week training period, he said.

Bradbury said he thinks the fact that Project Pollo offers competitive compensation helps him attract customers as much as the food does.

“If you're a consumer and you know that our product is just as good, just as affordable, just as convenient, might be better for you, is certainly better for the planet, and that everything that you're paying for is making a livable wage for somebody and taking care of their benefits, why not support that concept?” said Bradbury. “That's what we've seen.”

He said based on his data, about 29% of Project Pollo customers are vegetarian or vegan.

“That leaves 71% of the community that's legitimately wanting to support us because they believe in what we're trying to accomplish,” said Bradbury. That is why I decided to move at a rapid pace and see what sticks.”