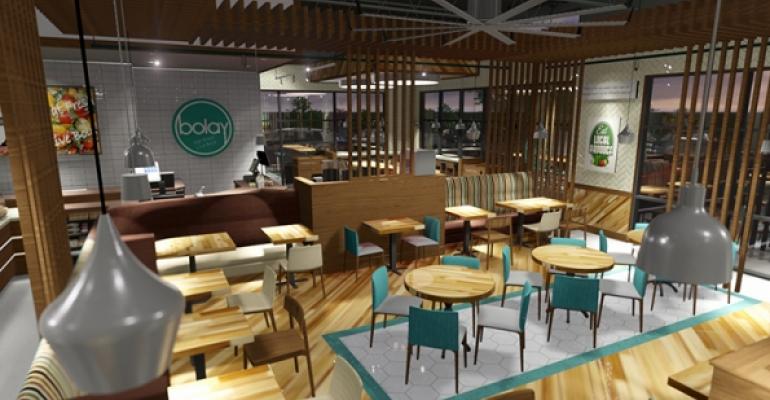 Health-conscious Bolay slated to open in South Florida in February

With restaurant-pedigreed creators, a new fast-casual eatery aimed at health-conscious customers will open in South Florida in February.

Chris Gannon, 32, with a background in quick service, casual and fine dining, has partnered with his father Tim Gannon, co-founder of Outback Steakhouse and a franchise partner in the rapidly growing PDQ concept, to create Bolay, a 3,000-square-foot restaurant based on high-protein, customizable bowl meals.

“We’ve seen in my generation a transformation in what people are eating and their food habits,” Chris Gannon told Nation’s Restaurant News Tuesday, citing such concepts as Tender Greens, True Food Kitchen and LYFE Kitchen.

Bolay’s bowls will feature bases of kale-currant salad, quinoa, black or basmati rice, or gluten-free cilantro noodles, to which vegetables such as broccoli, mushrooms, sprouts, cauliflower or roasted butternut squash, and proteins such as chicken, steak, tuna, tofu or pork tenderloin, can be added. The base bowls can be customized with a variety of sauces ranging from lemongrass tamari to carrot-ginger, and possible add-ons such as tomatoes, cheese and herbs.

“We’re going for incredible flavors first,” Gannon said, “and then it will be, ‘Oh, by the way, we’re nutrient-rich with a healthy spin.’ We’re not healthy first.”

The menu will be 100-percent gluten free, and Gannon said most ingredients will be free of hormones and antibiotics. Bolay will also serve cold-pressed juices, wine and local craft beers.

“Coming up with the name was the most difficult part of the process,” Gannon said, adding that he bounced ideas off friends and family and ended up with Bolay. “For us, it means a fun experience. It really doesn’t have a meaning.”

The younger Gannon, who has worked with PDQ, the casual-dining Outback Steakhouse, and the fine-dining Truluck’s, said the creators didn’t go with the traditional restaurant logo and colors. “We looked to the future,” he said, “so we went with teal, which represents the ocean and is clean.” They “Y” in the logo also represents grains, linking it to the restaurant’s nutrient-rich foods, he said.

Chef Martin Oswald, of the “nutritarian” Pyramid Bistro in Aspen, Colo., consulted on the menu, Gannon said. Both of the Gannons brought inspiration from their roots in New Orleans as well.

Chris Gannon said he is shouldering the creation of Bolay with his father’s “wisdom and guidance.” Tim Gannon will remain focused on development of PDQ, which has grown to about 50 units in eight states, the younger Gannon said.

Correction: Jan. 5, 2016  This story has been edited to update Tim Gannon’s business relationship with PDQ.