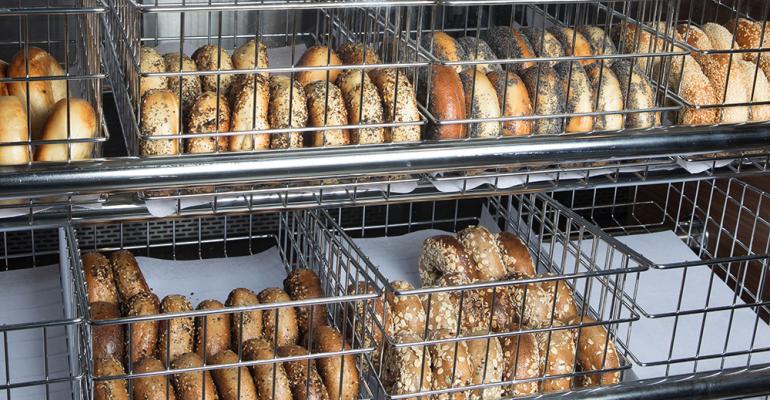 New York City and Montreal both take great pride in their bagels, and the owners of Black Seed Bagels try to bring out the best of both delicacies at their fast-casual chain, while also adding a fair amount of flair of their own.

“The expectations of hospitality in these environments are fairly low,” added native New Yorker and co-founder Matt Kliegman.

So they had their executive chef, head baker and first hire, Dianna Daoheung, create a style of bagel all their own. It’s about half an ounce bigger than the Montreal style and an ounce or so smaller than a typical New York bagel. It has the honey used in the Canadian ones and the salt level around that of the American variety.

And they created restaurants that are fun, with good music, warm colors, a friendly staff and open kitchens, as well as — in another departure from bagel shops — an ever-changing menu.

Now with seven locations, all in New York City — where, unlike in Montreal, bagel shops serve sandwiches — Black Seed Bagel operates on a hub-and-spoke model, with two restaurants baking the bagels and supplying them to the other five restaurants. A third hub is slated to open in the Brooklyn, N.Y., neighborhood of Bushwick this year.

The menu includes classic egg salad, fish salad and lox sandwiches, as well as one with almond butter and jam, an Italian-style combo, and a rotating variety of other offerings. It also creates monthly collaborations with other restaurants, which keep their culinary and public relations teams busy and also help fans of both restaurants get to know each other.

Kliegman and Bernamoff say their restaurants gross around $4,000 per square foot annually, and they plan to open between three and five more locations this year, all in New York City, before exploring new markets. They have no immediate plans to start franchising.