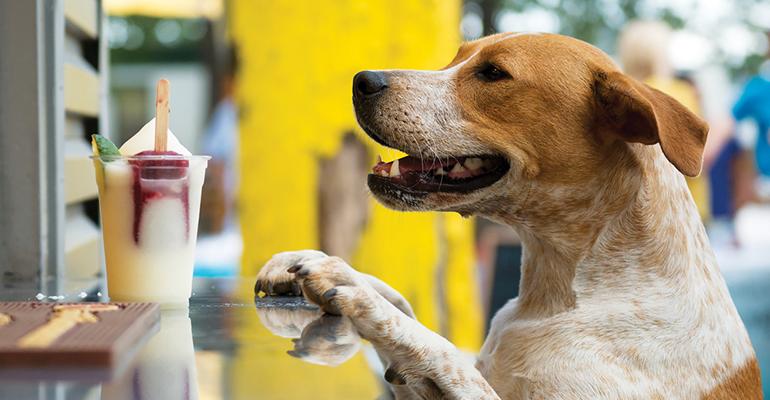 While dog-friendly restaurants have been a staple in trendy urban neighborhoods for several years now, MUTTS Canine Cantina co-founders Kyle Noonan and Josh Sepkowitz envisioned a concept that dropped the leash to function as a full dog park with a food and drink menu.

MUTTS Canine Cantina opened in Dallas in 2013, pairing a menu of burgers, fried chicken, milkshakes, and their signature “Barkaritas” with pup-friendly provisions (the frozen “pupsicle” and doggie dog mini hot dog) and three-quarters of an acre for dogs to play in the two enclosed dog runs. Mutts offers a daily ($5.95), monthly ($15.95), or annual memberships ($119.40).

MUTTS opened its second location in the Fort Worth area in 2018 and announced franchising in January 2019. Nine franchised locations are already in the works, with the first of those slated to open later this year. Three locations are slated for the Austin area in partnership with Austin Round Rock Canine Entertainment, two units will open in Frisco, Tx., and a third franchise location, in partnership with South Texas Capital, will open in New Branufels, Texas. The first three MUTTS locations outside of Texas are also slated to open in Boulder, Colo., starting this year.

“We started seeing other people copying us, none of which have been successful so far,” Noonan said. “Since we created our own category, we wanted to scale as quickly as possible and the best way to do that is through franchising.”

For now, the sun belt region is the primary target for MUTTS, and they plan to grow at a measured pace over the next several years, with a retail line of dog food and treats on the horizon as well. Once they have exhausted the warmer parts of the United States, Noonan says that he thinks MUTTS will try to partner with malls and development companies in indoor/outdoor spaces in the Northeast.