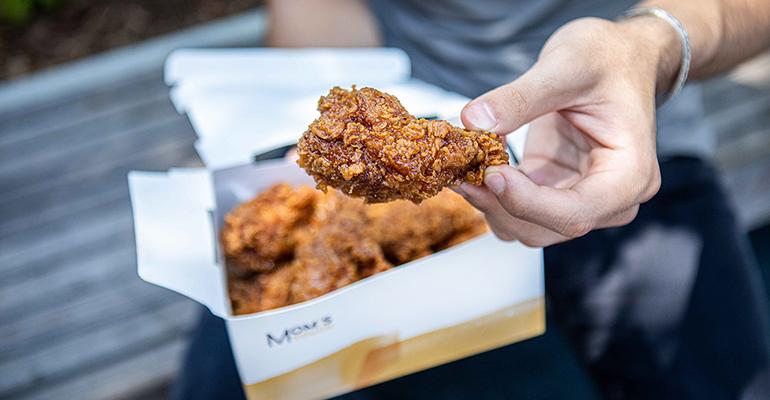 Meet Mom’s Touch, the Asian restaurant chain looking to expand its footprint in the U.S. with parent WaBa Grill

The brand, which has 1,300 units abroad, is expanding its presence to 3 units in Southern California with plans for franchising in the next few years

Korea’s fried chicken restaurant chain Mom’s Touch is making its mark on America with the announcement of a third unit opening in Southern California this quarter. One of its two existing stores in the area opened last summer, and the other in December.

“It is, I believe, conceptually a little bit different from what US currently has,” said Andrew Kim, CEO and president of WaBa Grill and the U.S. arm of Mom’s Touch. “You don't have a concept that combines all of the three very popular menu items [wings, tenders and fried chicken sandwiches] into one house and with sauces that are different and more on the spicy side with a little bit of bite.”

Mom’s Touch’s signature sandwich, the thigh sandwich on a brioche bun, has garnered buzz across social media along with the brand’s wings, which come covered in cheesy onion powder, soy garlic, Fuego and more.

In 1997, when the fast-casual chain first opened in Korea, the fried chicken sandwich was a new food item for the Asian market.

“It started to catch with the with the younger generations [who] were looking for something different, something exciting and with bold flavors. And the momentum just picked up and they were able to really chase after the market leaders in the fast casual and fast-food restaurant industry in Korea,” Kim said.

WaBa Grill is a “master franchisee” of Mom’s Touch, making it the U.S. parent as it expands in the states. However, the food reaches a similar audience, something Kim thinks gives Mom’s Touch an advantage as it begins to expand throughout the country.

“We have a large Korean American community that's already very well familiar with the brand,” he said. “So, we have sort of ready willing customers out there that would be attracted to Mom's Touch. And we have a community that's highly diverse. And, you know, willing to, to try good food wherever it might come from.”

The first California store opened in Gardena last summer. The second store just opened in Long Beach, while the third store, tripling the chain’s initial footprint, will open in the City of Industry in the first quarter of this year, barring any staffing or permitting challenges.

While the chain has seen some of the industry-wide staffing challenges of the past few months, that hasn’t stopped interest from a franchisee perspective.

“We are getting lots of requests for franchising already,” Kim said, but the brand is looking to current WaBa franchisees for the moment as it continues to expand. While he wants the brand to expand quickly, he also wants it to maintain its flair and mission, and he thinks existing franchisees within the WaBa brand are the perfect partners.

“This is an opportunity for them to look at another concept to bring in and at the same time be familiar with who we are and what we've been as a franchisor,” he said.

The brand is planning on expanding throughout California much faster than WaBa Grill expanded. Now that the company has a customer base and a franchise base, Kim is ready to expand Mom’s Touch with decades of experience in the restaurant industry and 200-plus restaurants under his belt.

“It's incumbent on us to seize the opportunity, given the reputation and the success that the Mom’s Touch has had in Asia to really take it to the next level,” he said.