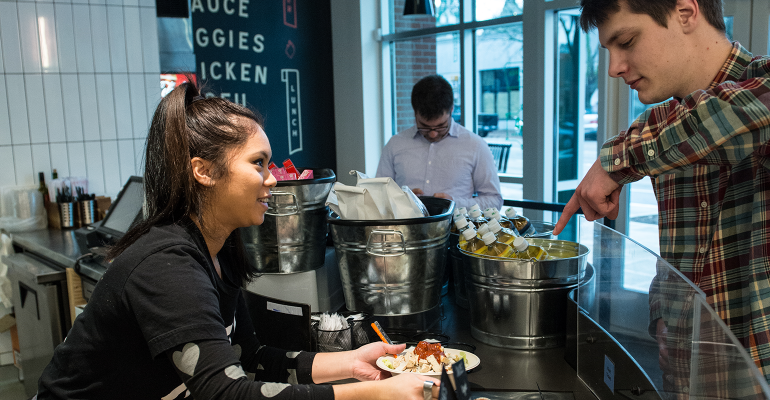 Kigo Asian Kitchen wants to do to Panda Express what Chipotle Mexican Grill did to Taco Bell.

Founder and CEO Steve Hooper said he sees opportunity for the five-unit chain to carve out a more-elevated position within the world of limited-service Asian fare.

No national player in the Asian space has come close to Panda Express, which has nearly 2,000 units worldwide. But Hooper said Seattle-based Kigo is a contender — albeit with a long way to go. The stir-fry concept was founded in Boston, in 2012, with early investor John Pepper, a co-founder of the Boloco chain. The first unit was developed with Compass Group USA on the campus of Northeastern University, which Hooper described as a beta test.

Hooper took the brand back to his hometown of Seattle, where he has opened four company-owned Kigo locations. By the end of the year, he expects to reach seven restaurants, with another four to six units to come in 2018.

Angela Stowell serves on Kigo’s board, and Ethan Stowell has helped expand the menu beyond stir fry, adding new platforms, like salads.

Core ingredients for the stir fries were also upgraded to all-natural chicken and grass-fed beef, and new vegetable options were added, like long beans, baby bok choy, snap peas and edamame, and herbs like Thai basil. The chain is working to develop housemade soda, banh mi sandwiches and soups that will launch in the fall, Hooper said. A breakfast menu will also launch in mid summer, with dishes like bacon fried rice.

“We’re essentially taking what was a one-trick pony and turning it into something that hits all dayparts,” Hooper said.

The Stowells also made a minority investment in Kigo. Hooper said the Stowells were drawn to working with the chain in part because of shared views on serving the community. “We’ve been really inspired by Steve’s dedication to helping disadvantaged populations by offering great jobs and an even better work environment that really fosters teamwork and success,” Ethan Stowell said in a statement.

Kigo has been working with agencies in Seattle that help find work for the formerly incarcerated and others facing employment obstacles. For example, Kigo is helping to develop a culinary program for Pioneer Human Services, the state’s largest operator of halfway houses, to provide job training and mentorship.

“It’s about creating opportunities for others in what is the entry industry for so many people,” Hooper said.

Because Kigo offers health and dental benefits, along with entry-level training, the chain is seen as a good employer, he said. That has helped the restaurants find workers at a time when competition for back-of-house staff has been stiff.

“People say, ‘If you need a job, go to Kigo.’ And it has become a virtuous circle,” Hooper said.

Ethan Stowell Restaurants looks for workers with a higher level of training. So Kigo has become the entry-level training source for the Stowells, eventually feeding workers ready to move up to the higher-end restaurant group. “They see us as an entry point where they could hire from Kigo,” Hooper said. “We’ve sent a number of folks from Kigo into better kitchens and better operations. We very much like to see ourselves as part of people’s lives, but we don’t pretend that people are going to have a 20-year career at Kigo.”

The Asian fast-casual segment has been seen as a tough nut to crack.

Hooper said ShopHouse erred by creating a menu that was “too authentic.” Kigo is aiming for flavors that are less Americanized than Panda Express, but not so authentic that they lose the average consumer, he said.

The time is right for Asian concepts, Hooper said, although Kigo faces competition from a growing number of players, including brands like Bibibop, Asian Box on the West Coast, and Wok Box in Canada.

“Every cuisine type seems to go through a wave,” Hooper said. Mexican food was trendy in the 1990s, sandwiches in the early 2000s and fast-casual pizza more recently.

“I think Asian is the next thing,” he said.

A source updated a previous statement and clarified that there was an investment in Kigo Asian Kitchen by the Stowells.
TAGS: Fast Casual Menu Food Trends Operations A place at the table
0 comments
Hide comments
Related
Sponsored