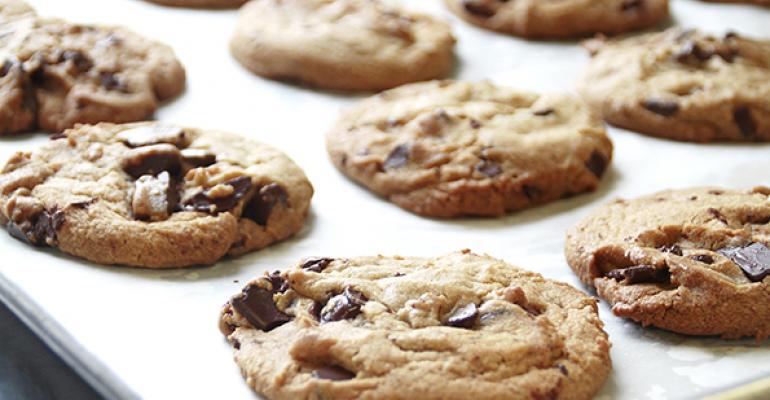 <p>Insomnia Cookies got its start as a service catering to college students. It now has 92 locations.&nbsp;</p>
News>Emerging Chains

The concept, created in a dorm and catering to college students, is growing

Find a need and fill it. That’s Entrepreneurship 101 — the most basic rule of starting a business.

But who knew that late-night cookie delivery was a need?

Apparently Seth Berkowitz did when he was a junior at the University of Pennsylvania in 2004.

Berkowitz developed a flexible recipe that could be easily adapted to 10 different types of cookies. He baked the cookies in the oven of his off-campus apartment, handed out free cookies and hung flyers in dorm rooms, and took orders from 8 p.m. to 2 a.m. — every night.

“I was a one-man band,” Berkowitz said. “I was making cookies, baking cookies and delivering them. I was taking orders and doing all the things that were pretty ridiculous. But the idea resonated with college students, the college paper did a story and it took off. I went from five to six orders to 50 to 60.”

Twelve years later, Berkowitz’s Insomnia Cookies is a rapidly growing chain of 92 units near college campuses and in urban areas across the country. That’s not the only thing that has expanded: The hours now span from noon to 3 a.m.

And there’s a simple reason for how the chain got its late-night start. “I was up,” Berkowitz said. “To this date, I’m still up. But that hour of night I was up working and studying. It met a college student’s time frame.”

Those hours still work for the chain, which has offices in New York and Philadelphia.

“A lot of young professionals and students are up these hours,” Berkowitz said.

The initial plan was to create a delivery-only business. In 2004, the only concepts that would deliver were pizza chains, Chinese restaurant and sandwich concepts, Berkowitz said.

But he thought that delivery could work for other menu items, predicting, as it happened, that the delivery surge that would happen a decade later.

Cookies made sense. “I have a natural sweet tooth,” Berkowitz said. “It was a logical idea at the time.”

He started by making two different bases, vanilla and chocolate, with additions to create 10 different flavors.

“I’d pre-make the dough before class and then come back and make the cookies,” Berkowitz said.

Did his roommates eat all the profits? No. “They were pretty cool,” he said. “They would order. They’d call me. ‘It’s Justin. I’d like six chocolate.’ ‘Justin, you’re on the second floor.’ I’m still close to a lot of them. I really appreciate how generous they were.”

As popularity grew, he ultimately got real recipes. The quality of the cookie has been the draw. “It’s a very, very good cookie,” Berkowitz said. “It’s warm. It melts in your mouth, and in your hand.”

It would take two years of looking for the right spot to set up a base for delivery before Insomnia Cookies ultimately opened its first retail shop.

Berkowitz acknowledged that he was hesitant about establishing a retail shop, citing struggles for other cookie chains in the early 2000s. He also noted that the college market is seasonal, which might make it difficult to lease the sites that such a cookie shop would need.

But, he said, “As I’ve learned in a little more than a decade, you pay up for retail.”

Insomnia Cookies opened its first retail shop in Syracuse, N.Y., in 2006. After that, the concept took off.

Three-quarters of its locations are in college areas, but it has a healthy dose of units in urban areas like New York City and Philadelphia. It opened a shop in Cleveland the day after the Cavaliers won the NBA Finals basketball championship. “That was a pretty funny day to open, really,” Berkowitz said.

Most of Insomnia Cookies’ sales come through delivery. Perhaps someone in a college dorm will decide to order a cookie delivery, and others will add their orders. But some come from corporate events as well. Insomnia delivers orders that come out to $6 or more.

But delivery orders feed off the retail site. The storefront enables customers to walk past, smell the warm cookies and try them. Later on, when a craving for sweets hits, they order delivery.

“It has a natural rubber-band effect,” Berkowitz said. “Without delivery, it’s less exciting.”

Most of the chain’s growth has occurred in the past four years, perhaps not coincidentally as delivery and mobile ordering has ramped up. The chain plans 30 to 40 more locations per year going forward. And current trends seem to favor this one-time dorm-room project.

“The on-demand universe is not bad for us,” Berkowitz said. “So many businesses are providing service at your fingertips, and we’re already providing that. Delivery is more mainstream now. It just took a little bit of time.”