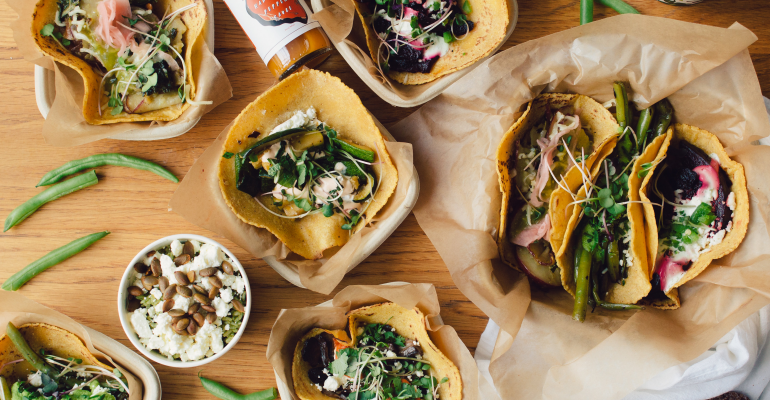 When Bettina Stern began her food journey with a blog as a mom with three sons, she didn’t know what would come out of it. She just knew she loved fresh vegetables and sharing her passion for cooking with others.

Stern and her friend Suzanne Simon eventually started Chaia Tacos at a farmers market stall in the Freshfarm market by the White House in 2013, in a 10-feet-by-10-feet stall with a camp stove and a cooler.

Chaia Tacos was an instant hit and sold out in an hour and a half.

The concept is all about fresh vegetables. It’s entirely vegetarian and can almost entirely be made vegan.

“We realized this crazy, weird, esoteric idea to feed people fresh vegetables cooked in a myriad of ways was intriguing to folks,” she said.

Within eight weeks, the tent had eight people working at it. Over the next two years, Stern and Simon learned how to cook year-round in farmers markets until finally opening their first brick-and-mortar location in Georgetown in November 2015.

Take a tour of Chaia below.

In January 2019, the concept opened its second location in downtown D.C. That was followed by a third location mid-pandemic in September 2021, in Bethesda, Md.

The menu is small, meant to show off seasonal vegetables and chef-driven cuisine that changes by the season. It’s mostly made up of tacos, but recently there has been the addition of enchiladas for travel-friendly food.

“Tacos are a food that’s eaten immediately, we realized,” Stern said. Enchiladas were introduced to help the team deliver food during the pandemic — to great success.

Some of the flavorful tacos on the menu include the chipotle sweet potato hash, smoky collard greens, creamy kale and potato and the braised mushroom.

Operations at the newest store look a little different with the change in business.

When the downtown D.C. location opened in 2019, it was designed to be at the center of a busy business district — business that’s now gone because of COVID. So instead, Stern and her team are using the larger kitchen as a commissary to feed the Bethesda location, a blueprint for future growth.

“I think in some ways, we were disrupting a fast-casual model by being women in that. But we were also disrupting it because we were saying it doesn't have to be quick and unfriendly,” Stern said. “We're going to create spaces that are warm and inviting, and ask you to come in and stay with us.”

By using the hub and spoke model, Stern hopes to enter new cities and grow exponentially.

Though she hasn’t named any cities yet, she expects to grow soon because she’s always been of the entrepreneurial mindset. She was just waiting for the right time.

“I have, from the very get-go, wanted to do something entrepreneurial. I wanted to be able to bring something to the world that didn't exist. And I wasn't quite sure what that was. And I wasn't actually confident that I could do that in my younger years,” she said.

In fact, the average age for an entrepreneur to start their own successful business is 45, according to a 2018 Harvard Business Review study. Stern was 48 when she walked into that farmer’s market.

“It took a while for me to get to that point of being able to take that leap and take that risk and feel like I could give my all to a business,” she said, “because when you're starting a business, it is all-consuming and you do need to have your physical self and your emotional-self ready to do that.”