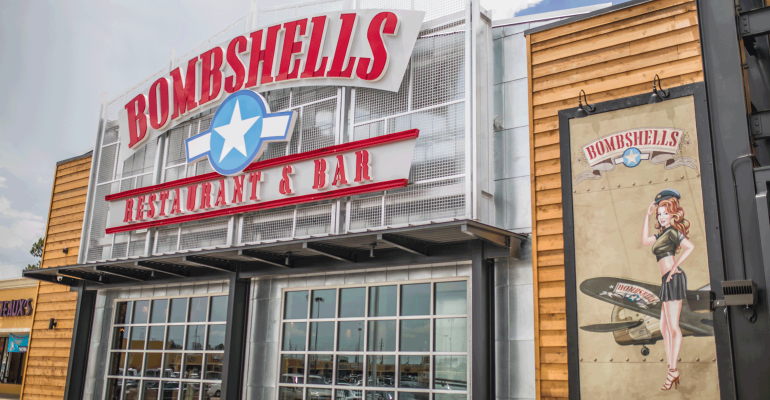 Bombshells Restaurant & Bar opened its fifth location in July, debuting a modified layout that company executives say will be the brand’s expansion blueprint.

The restaurant is the third in Houston for hometown-based parent company RCI Hospitality Holdings Inc., which owns and operates five Bombshells as well as 40 adult entertainment venues such as Rick's Cabaret, XTC and Club Onyx.

The Bombshells subsidiary, which opened its first restaurant in a Dallas conversion in 2013, expects its newest and first ground-up build to serve as a prototype for its planned growth, said Eric Langan, RCI president and CEO, in an interview Monday.

The company has two more restaurants planned for this year and expects to open three in each of the next several years, Langan said. The latest restaurant covers 7,900 square feet inside with a larger-than-typical 3,100-square-foot patio. It seats 433. “About 8,200 square feet is what our prototype store will end up being,” Langan said. “The majority of our stores going forward will be built on this floor plan.” The design is based on an aircraft hangar.

“This restaurant is a fine-tuning of everything we’ve done over the past four years, said Travis Reese, RCI executive vice president, who originated the Bombshells concept.

The brand offers elements that appeal to social marketing, such as three 2,000 (inactive) bombs at the front and military theming throughout.

“We’re trying to create places for people to take pictures, be it Facebook, Instagram or Snapchat,” Reese said.

“We have a very varied menu,” said David Simmons, Bombshells director of restaurant operations. “We do a lot burgers, wings, ribs and chicken-fried steak. Our top burger is The Medic, a half pound burger with cheese, jalapenos, chiles and fried egg on top.” Sales on average are split evenly between beverages and food. He said the concept’s per person check average lunch is $21 and dinner $32 to $35. “That’s where the 50 percent liquor helps,” Langan added. The company said average annual unit volumes were more than $4 million each for the four restaurants open at the end of fiscal 2016.

Because this Northwest Houston unit is the brand’s first unit with new construction, Langan said the layout has been modified from earlier restaurants, of which the company has one in Austin and the original in Dallas. The Bombshells division buys its real estate, and the company has recently begun a franchising program that it intends to pursue in 2018

“We did build the patio a little differently,” Langan said. “We moved the walk-in coolers and incorporated a giant oak tree that we didn’t want to cut down. So rather than a 2,400 square foot patio, we have about 3,100 square feet of space in this location.” About 60 percent of the patio is covered to protect it from sun and rain, he said. Bombshells also has connected controls for heating, air conditioning, sound, music and the 100 televisions with technology so a manager can control the environment from an iPad.

The kitchen in future units may be expanded, Simmons said.

Langan said the brand’s demographics spread across four dayparts, including workers from the nearby area at lunch, a happy hour that tends to be mostly male, dinner from 5:30 p.m.-10 p.m. that includes families, after late-night customers dominated by 25 to 30 year olds until 2 a.m.

“If our late-night crowd is down, our lunch can be up,” he said. “We don’t have the downtime of a typical casual-dining restaurant.” Sporting events bring in a combination with a sports-bar crowd, including a standing-room only crowd of 500 at a recent Ultimate Fighting Championship event.

Because of the brand’s military theming, Reese said the company is working with veterans and armed forces-linked groups, such as the Folds of Honor scholarship program, on its openings. It also offers a 20 percent discount to current military personnel and veterans.