Biscuits are the manna of about any Southern meal worth its salt, and Holler & Dash Biscuit House rises to the occasion —especially if it’s a fast-casual one.

Lebanon, Tenn.-based Cracker Barrel Old Country Store Inc., known as no slouch in the full-service biscuit realm, opened the first Holler & Dash in 2016 in Homewood, Ala., and has expanded the concept to seven restaurants in five states.

The Holler & Dash menu, based on consumer feedback, has evolved since the first restaurant opened, Chissler said.

“Our guests were looking for more variety, value and healthy options,” he said. “The biggest changes were made to the menu by adding menu categories.”

The Holler & Dash team, which operates separately from the 653-unit parent, added a “classic” biscuit section featuring items like bacon, egg and cheese and sausage, egg and cheese biscuits.

“A few months ago, we added bowls, sandwiches and sides,” he said. “We have also made changes to our service model. Our guests wanted Holler & Dash delivered to their door, so we began working with a variety of third-party delivery services.”

Signature biscuits remain the best-sellers, he added, especially the Kickback Chicken, with fried poultry, goat cheese, green onion and sweet pepper jelly “with a kick” for $9. A fried egg can be added to any of the signature biscuits for a dollar upcharge.

“Our Grit Bowl and the Fresh Farm Bowl are also very strong menu items,” Chissler said. “The charred corn and sweet potato kale salad are our top sides next to the fan favorite tots.”

Units have a small area for retail sales of items such as jams, sauces, pickles, salt, mugs and packaged coffee, carrying on the tradition of its Cracker Barrel Old Country Store parentage.

Where space is available, such as the 3,000-square-foot Holler & Dash that opened last year in Atlanta, the restaurants also pay homage to the covered front porch of Cracker Barrel.

The most rewarding part of the past two and half years, Chissler said, was developing the upstart brand’s culture.

“Watching our leadership team and the house-level team members develop is one of the highlights of the first few years,” he said. “The other exciting part of creating this brand is seeing how the guests have embraced us. I love looking at all the posts on social media. You can see how our guests love H&D through their photos and comments.” 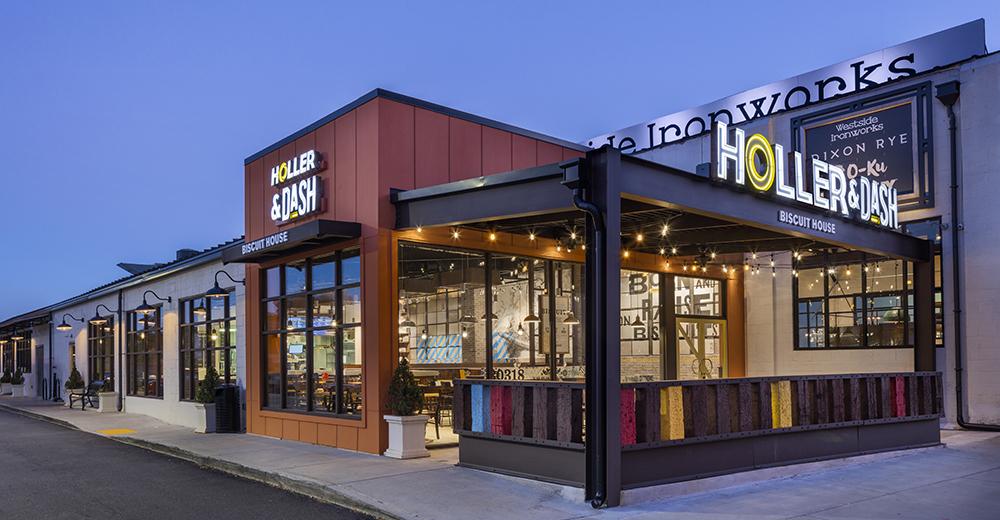