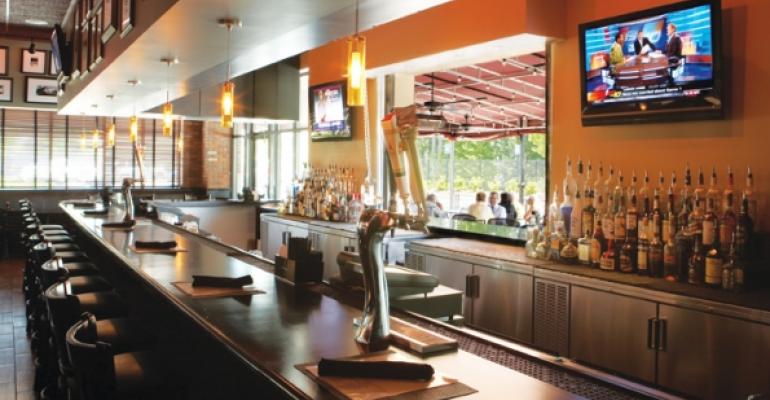 Atlanta-based Marlow&#39;s Tavern is an upscale-casual concept poised for growth. This article ran in the Dec. 17, 2012, issue of NRN.&nbsp;Subscribe today.&nbsp;

Marlow’s Tavern’s co-founder, chief executive and executive chef John Metz said his Georgia concept isn’t a restaurant chain — and he doesn’t ever want it to be. Rather, he characterizes it as a collection of high-quality restaurants, each serving its own individual neighborhood.

“We want people to relax and not feel the pressures of the outside world,” he said of his upscale-casual dining company. “Our intent is to keep it very local.”

Marlow’s Tavern opened its first location in Alpharetta, Ga., in 2004. Since then the brand has expanded to 10 locations, all but one of which are in the metropolitan Atlanta area. The 10th location is in Orlando, Fla., a market that is poised for growth, Metz said.

From the very beginning the concept itself was simple, he said. In a crowded casual-dining segment, Marlow’s Tavern wanted to stand out because of its upscale food and cocktails.

“We have chef-driven food and handcrafted cocktails,” Metz said. “It was about taking some of the familiar items that people may know but elevating them with different flavor profiles. We’ve done that with both the food and cocktail parts of our menu.”

Even the most routine menu items are given an upscale twist, Metz said. For example, the burgers are made only with fresh beef and a special house-made seasoning. They’re served on brioche sesame buns seared on a flat-top grill, and topped with romaine lettuce, Roma tomatoes and a tomato-bacon jam.

Other upscale menu items include such entrées as Grilled Atlantic Salmon served with a vegetable succotash in a tomato beurre blanc sauce, and Steak Frites served with fresh arugula and coriander dressing. Snacks include Truffled Parmesan Fries and Shrimp & Crab “Nacho” Plate.

“From the cocktail side we’ve done the same thing,” he said. “We use unique bitters and aperitifs.”

The beer list is divided into three sections: On Draught, In Bottle and Craft & Local. Craft beers include Bells Pale Ale from Michigan, 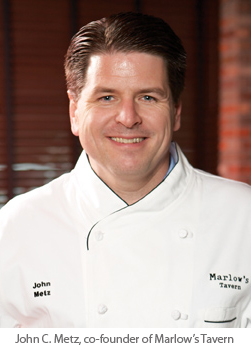 Sweetwater Blue from Georgia and Sierra Nevada Pale Ale from California, among many others.

Although the menu is the same across all of Marlow’s properties, Metz makes an effort to make each one unique to its neighborhood. Each location features local music and events, as well as tie-in promotions with local charities.

It’s that localization, Metz said, that makes Marlow’s Tavern a group of restaurants — not a chain.

Although Metz declined to provide sales figures, he said sales have seen double-digit increases every year since 2008 — even during the recession.

Although the concept’s average per-person check varies from location to location, Metz said it averages out to about $20. The restaurants’ target customer is a “discerning professional” between the ages of 29 and 49 years old.

“We’re looking for those folks who know quality and want something in their neighborhood that’s good for themselves and their family and their friends,” he said.

“We have seen restaurants that fit this description growing in number and kind of outpacing casual overall,” she said. “I think that consumers appreciate and get that the food is a little better [and] that the atmosphere and the service feel more like an experience than everyday casual dining.”

Technomic defines upscale-casual restaurants as those that tend to offer an experience with a more adult focus — such as a cocktail menu — and that generate average per-person checks between $20 and $50. And when it comes to attracting customers, differentiation is key.

“I think consumers still see a lot of sameness among traditional casual dining,” she said. “Smart operators are looking for ways to differentiate themselves,” such as upgrading the menu or the dining experience. 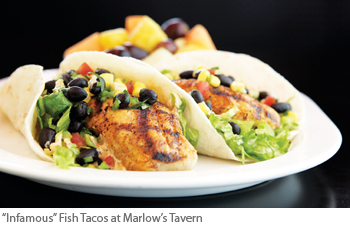 As such, when customers visit upscale-casual restaurants, they tend to spend more and often order an adult beverage and dessert.

“Customer strategy for saving money when it comes to upscale restaurants is to just visit less frequently,” Chapman said. “So when they are there, they spend more. They want the full experience they’ve saved for.”

Chapman said that in her opinion, Marlow’s Tavern is definitely a “growth chain.”

“John Metz has the credibility in Atlanta to pull it off,” she said. “He obviously has casual-dining experience. He’s got the food chops and the following already.”

During the next five years, Metz said he plans to open about eight more Marlow’s Tavern locations in the Orlando area. He still sees room for growth in the Atlanta area, too. Moving forward, one or two new stores will be opened each year, he said.

To help control quality, Marlow’s Tavern won’t be expanded through franchising. Rather, Metz said, all locations will be company operated and opened with traditional financing.

Metz said he doesn’t see much direct chain-restaurant competition in his target markets, but he added that, when expanding, the company is cognizant of the regions’ independent restaurants and local bar scenes.

For now, he said, the company’s growth focus will remain on Atlanta and Orlando. When those markets are filled out, “focus will turn to the rest of the Southeast.”

“It’s all about the demographics, research and partnering with the right people in those cities,” he said. “We don’t want to grow too fast. We want to grow smart.”