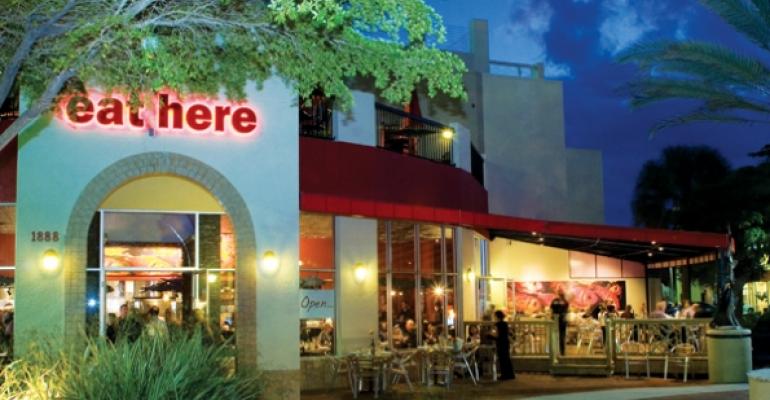 The first page of Eat Here’s Sarasota, Fla., menu opens with the following greeting: “Welcome. The happiest countries on Earth have in common a culture of sharing meals. We hope that Eat Here’s focus on small plates for tasting and sharing lends itself to a happy evening.”

Then the menu gets down to business, outlining this growing casual-dining chain’s moderately priced, chef-crafted food.

Sean Murphy, Eat Here’s president, is a fine-dining veteran. Having operated Beach Bistro — his high-end restaurant on Florida’s Anna Maria Island — for 27 years, he understands how to prepare upscale food in a stylish environment.

However, Murphy said, “I began to develop enthusiasm for a second restaurant concept that was more casual — probably a little less focused on being elegant and a little more focused on being joyful. And I wanted to [offer] something at a more accessible price point.”

The price point at Eat Here, while still higher than at the average casual-dining operation, is much lower than that of its fine-dining counterpart. At Beach Bistro the average check can be upward of $75; at Eat Here it’s $25.

With Eat Here, Murphy wanted to take the best elements of Beach Bistro and make them more accessible to mainstream diners. The butters, sauces and dressings are the same at both Eat Here and Beach Bistro, but the proteins are cheaper at the former.

For example, at Beach Bistro Murphy serves an herb-rubbed rack of lamb with a port and rosemary demi-glace. The same dish is offered at Eat Here, he said, but with a port-braised pot roast as the base protein.

Sarasota has a large senior-aged demographic, and older customers typically order a first and second course at dinner, Murphy said. Younger customers, on the other hand, tend to adapt better to ordering small plates.

The target customer, Murphy said, is anyone who’s looking for upscale food at a lower price point.

“It’s anybody who absorbed the value of their home in Florida — a region hard hit by the recession and housing bubble — who developed Champagne tastes and who have beer budgets,” he said.

When developing the restaurant, Murphy also focused on the decor. As a restaurant consultant, he knew he wanted the place to feel a certain way. It needed to be open, welcoming and colorful. But perhaps not surprisingly, even the decor has a food focus.

“There’s a lot of emphasis on lighting the food,” he said. “The food was designed to be colorful, and we light it [at the tables] appropriately.”

The name Eat Here came from Murphy’s days as a restaurant consultant, he said. One day on the job, an architect was showing him a mock-up of a new restaurant’s signage — only the restaurant didn’t yet have a name. So the architect just wrote “Eat Here” in its place.

“It stayed with me,” Murphy said.

The plan going forward is to expand the concept further in Florida, Murphy said.

“The business plan for this year is that we will look for another site in this area, but a little farther north,” he said, noting that he’s also open to bringing the concept even deeper into south Florida.

“I’d like to move a little out of seasonality,” he said, and into more year-round destinations. The farther south a restaurant in Florida is located, the longer its tourist season, he explained. As such, locating farther south has the potential to boost sales and traffic.

When choosing new locations, he said, he tends to move into old restaurants. That way he doesn’t have to build in the kitchen, making it a less expensive proposition.

“We’re looking for investors to open in combination with self-generated capital,” he said. “It probably has potential for franchise, but that’s not an immediate concern.”

There currently are three Eat Here locations, and growth, while imminent, won’t be fast. In 2013 Murphy hopes to open one new Eat Here restaurant.

“Our next step this year is to consolidate what we’re doing, refine our purchasing,” Murphy said. “We’re looking for sites probably in the St. Petersburg/Tampa area.

“We’d like to do a little polishing,” he added.

Sack said he hopes to grow the company in a spoke-and-wheel method — using Sarasota as home base — and has no plans to take Eat Here to the national stage.

“I’m always leery of people who come up with big projections. We’re not looking to have 1,000 locations,” he said. “Our goal is to expand it on a very pragmatic basis.”

Within the year, Murphy said he hopes to open a commissary in Florida so that he and his chefs — there are three at each location — can develop new and perhaps proprietary flavors. It will help keep Eat Here’s focus on what’s most important, he said: the food.