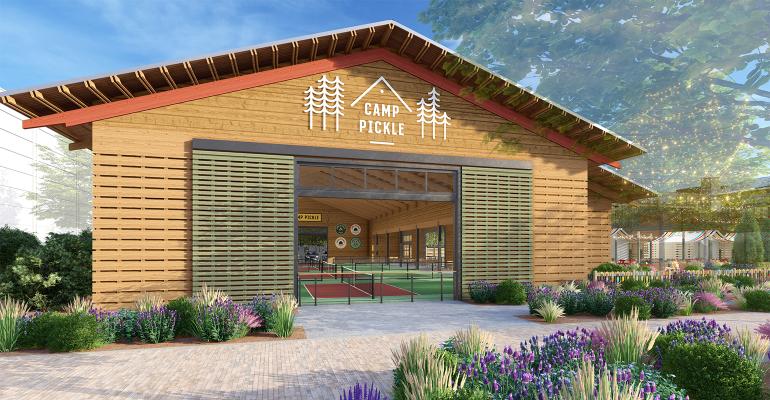 Robert Thompson, best known as the founder of the Punch Bowl Social eatertainment concept, is preparing to launch a chain of dining-and-games venues focused on the surging pickleball trend.

Camp Pickle will feature a nostalgic “1940s national park/summer camp” motif, with a food and beverage menu designed to match, Thompson told Nation’s Restaurant News. The indoor/outdoor locations are expected to measure 55,000-75,000 square feet, with 10-14 pickleball courts, plus other “old school” games such as duckpin bowling and darts.

Sometimes described as a cross between badminton and ping pong, pickleball is increasingly enjoyed by people of all ages, and is seeing strong growth among Millennial and Gen Z players, Thompson said. The sport drew 4.8 million participants in 2021, according to the Sports & Fitness Industry Association, representing 14.8% growth over 2020. It has grown at an average rate of 11.5% per year over the last five years, the SFIA reported.

Thompson said the first Camp Pickle location is scheduled to open in Huntsville, Ala., in early 2024, followed by one in Denver later that year. He plans 10 company-owned locations by the second quarter of 2026, in markets such as Atlanta, Dallas, Minneapolis and others across the country.

“Our approach is to create these food- and beverage-centric social gaming activation concepts in large environments, catering to both a la carte folks off the streets, and large enough for big corporate event opportunities as well,” said Thompson.

He projects that Camp Pickle will generate about 80% of its sales from food and beverages, with a menu created by his new hotel-and-restaurant venture, Angevin & Co. In tune with the campground theme, the menu will feature wood-fired cooking, with some Mexican influence, Thompson said.

Beverages will include large-format cocktails inside of old Coleman coolers — “kind of a ‘wink-wink’ at camping culture, perhaps,” he said.

Entrées will be priced in the low to mid-teens, and sandwiches in the $10-$15 range. Average tickets are hard to predict in concepts such as this because of the variety of uses, Thompson said. Some customers will come just to eat and/or drink, and others to enjoy some combination of gaming, dining and drinking.

Plans call for customers to order at a counter, or from their table using QR codes. Servers would bring food ordered at the counter to tables using geo-trackers.

Thompson anticipates that 35-40% of sales will be driven by corporate events.

Although he declined to offer predictions for projected costs and revenues, Thompson said he’s read reports of similar concepts that cost between $10 million and $18 million to open, and generate traffic of about 700,000 customers per year.

Each Camp Pickle location will likely employ about 200-250 people, he said.

Other concepts in the pickleball space include Kansas City, Mo.-based Chicken N Pickle, which has six locations open and several more in development.

In keeping with the camping theme and in line with his company’s focus on minimizing its carbon footprint, Thompson said construction of the Camp Pickle concept will feature mass timber materials. Prices for mass timber have come down to the point where they are on par with steel, he said.

Thompson also said Camp Pickle will represent his first foray into franchising, and he has already been in discussions with potential franchisees.

“There are a lot of real estate developers and high net worth individuals that either own land, and see an opportunity to do something with pickleball, or high net worth folks who are just obsessed with pickleball and want to own one,” he said. “So instead of them dropping $10 million-plus … without the professional experience of managing and operating eatertainment, we'll sell them a franchise. We’ll design it, build it, if they want us to, and certainly we're interested in managing it for them.”

Separately, Thompson said another eatertainment concept he’s been working on, Jaguar Bolera, which will also feature duckpin bowling and other social activities, is on track to open in Raleigh, N.C., late next year.