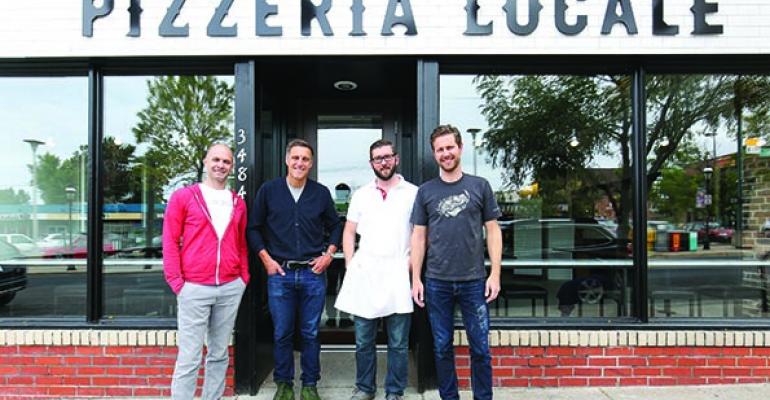 New dough made with heirloom wheat could be game-changing, says co-founder

The partners behind the Chipotle Mexican Grill-backed Pizzeria Locale concept opened their second unit in Denver earlier this month with a significant change on the menu: the crust.

The new restaurant has a completely reformulated crust made from Edison wheat, an heirloom variety grown in Oregon and milled partially in house at the restaurant.

Stepping away from the traditional Molina Caputo double-zero flour used at the original Pizzeria Locale, co-founder Bobby Stuckey described the move as a potential game changer.

Stuckey said the traditional double-zero flour has been widely used in the pizza industry since World War II, a time when flour became a commodity that was stripped of nutrients to give it a longer shelf life and making it easier to ship around the world.

“It probably saved billions of lives because it helped stop starvation,” said Stuckey. “But it’s not healthy for you.”

The Edison flour, on the other hand, is a nutrient-dense whole wheat that offers a richness of flavor not found in commoditized wheat, Stuckey said.

The price of the product is the same, Stuckey said.

The new flour, however, is trickier to work with in a limited-service setting where the pizza dough is made from scratch in house in the Neopolitan style.

The window of freshness is shorter, for example, and it takes proper hydration and fermentation. “It requires more finesse and meditation in making the pizza balls,” he said.

The move, however, could also be a differentiating factor in the fast-casual pizza space, which has become increasingly crowded with players that are rapidly expanding.

Others make their dough from scratch in house, and several offer varying crust options, from different flavors to gluten free.

Pizzeria Locale arrived somewhat late to the game. The concept began as a full-service restaurant that Stuckey and partner Lachlan Mackinnon-Patterson tweaked with a fast-casual variation that won an undisclosed investment from Chipotle last year.

Given that other brands have dubbed themselves “the Chipotle of pizza,” many in the industry are watching Pizzeria Locale to see what the real Chipotle will do with the brand.

Stuckey, meanwhile, sees the wheat experiment as emblematic of the shared devotion to ingredient quality that attracted Chipotle’s investment in the first place.

As was true for Chipotle in the early years, growth for the Pizzeria Locale brand will be slow and steady, said Stuckey.

The partners are not ready to say where the third fast-casual unit will be, but it will likely open in 2015.

Currently, the focus has been growing the people side of the business to get the experienced teams in place for more units, he said.

Developing a pipeline of real estate is also a priority, as well as tweaking operations to develop practices not likely found at other limited-service chains.

“We didn’t get into the quick-service business to do it the way everyone else played the game,” he said. “The only thing we have in common was to be quick.”

Meanwhile, the first fast-casual Pizzeria Locale is “doing great,” Stuckey said, though he declined to offer sales numbers except to say they “started healthy and just got healthier.”

The second unit, at about 2,000-square feet, is about 30-percent smaller than the first, but seats the same number of guests: around 60.

The new location in Denver’s West Highlands neighborhood is more residential, so Stuckey predicts that the new restaurant will have a stronger dinner business.

For now, the new crust is available only at the Highlands location of Pizzeria Locale, but it may soon be available at the original units.

So far, the reception from customers has been positive, though they do notice a difference, Stuckey said.

“The crust is different and some people don’t like change. They’re saying it’s not like what they’re used to,” he said. “I had a phone call from one guest who said, ‘wow, you guys are nuts,’” Stuckey said. “But Lachlan and I are not afraid to do new things.”