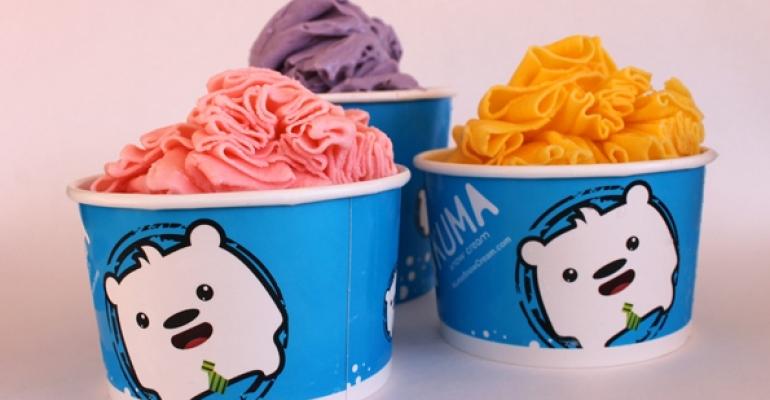 "Snow cream" is a hybrid of shaved ice and ice cream.
Dessert Trends

Sometimes called “snow ice” or “shaved snow,” the product Tila has designed taps the style of a Taiwanese dessert known as “xue hua bing,” which is like a hybrid of shaved ice and ice cream.

He has developed a proprietary organic milk base for the snow cream, which is naturally flavored and sweetened with sugar. The base is frozen into ice blocks and then shaved to order into delicate ribbons in the bowl.

The product is creamy, like ice cream, but also has a texture that evokes finely powered snow, he said. “It’s lighter even than gelato,” Tila said. “It has about one-quarter the calories of ice cream.”

Kuma is a concept Tila intends to grow after testing it in Las Vegas. He said he hopes to see it embraced by non-Asians the way they embraced the tart frozen yogurt of Pinkberry and Red Mango, which also has Asian roots.

Similar snow cream concepts have already been popping up primarily in Asian communities in cities like Los Angeles. One in Los Angeles’ Little Tokyo Westwood neighborhood called Blockheads Shavery Co, which opened in 2011, often has lines out the door. The concept features flavors like green tea, black sesame, taro root and avocado along with chocolate, strawberry cheesecake and peanut butter — though partner Alex Yu said the best sellers are green tea and “original,” which is like vanilla.

At Kuma – a derivative of the Japanese word “shirokuma,” or polar bear – Tila also plans to offer some Asian-inspired flavors like green tea, taro root, black sesame and honeydew, but also standards like chocolate, strawberry and vanilla. Seasonal snow creams, like coconut, açai or pomegranate will rotate.

Also available will be 12 to 16 dry toppings, from Oreo cookies to mochi balls, as well as an array of sauces. The product will be offered in 20-ounce (“Ninja”) or 32-ounce (“Sumo”) sizes. Prices for snow cream with three toppings will range from $5.50 to $7.

The potential chain concept is a first for Tila, who comes from the fine-dining and television world. He is chef/partner of the Los Angeles gastropub The Charleston and former chef of the pan-Asian restaurant Wazuzu at the Wynn Las Vegas. And he has appeared on a number of TV shows, from “Iron Chef America” to Anthony Bourdain’s “No Reservations.”

Though he was raised in Los Angeles, Tila describes himself as Thai/Chinese. This year, the chef was named the first Culinary Ambassador of Thai Cuisine by the Royal Thai Consul-General of Los Angeles, representing the country’s culture and cuisine in the U.S.

After Las Vegas, Tila plans to move Kuma into another market, probably in California. The goal is to franchise the brand, though he also plans to look at foodservice contractor partnerships that might bring Kuma to business-and-institutional settings. Eventually, he wants to roll out a “Little Bear” food truck.

“I really have a lot of confidence in this concept,” he said.