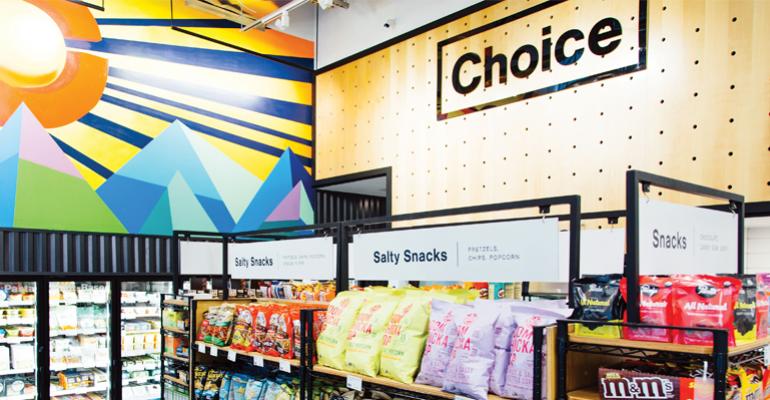 With more restaurants offering grab-and-go options and grocery stores getting more sophisticated with their prepared-food offerings, it was only a matter of time before a brand like Choice Market came along.

The Denver-based concept generates 40 percent of its income from the nearly 3,000 retail items available at any given time in its 2,500-square-foot space, CEO and founder Mike Fogarty said. The remaining 60 percent comes from its foodservice offerings, including breakfast burritos, quinoa bowls and burgers.

Retail items lean heavily toward snacks, with traditional candy and jerky as well as healthier options such as nuts and protein bars.

There’s plenty of produce, too, and since Choice Market is also a restaurant, older and less attractive fruits and vegetables can be moved to the back of the house and cooked.

The average per-person check is $13 and the most popular menu item — more popular than the beef burger — is a vegan burger made with Beyond Meat.

Choice Market has one location in downtown Denver, which opened in 2017. Two more locations are slated to open in that city this year.

The food, whether packaged or prepared, caters to modern urban consumers, so breakfast sandwiches are made with cage-free eggs and carefully sourced local bacon, although the actual makeup of what’s available will vary by location.

“What’s cool about our concept is were going to flex with whatever neighborhood we’re serving,” Fogarty said. “Let them dictate what goes on the shelves and, to a certain extent, on our menus.”