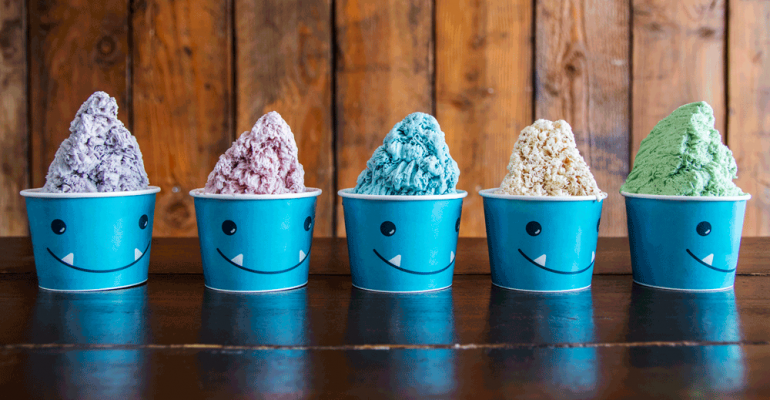 Snowdays wants customers to relive childhood memories of a day out in the snow with its shaved cream, a cousin to the popular Asian dessert shaved ice.

As playful as the concept gets with its customizable toppings, modern decor — featuring a friendly Yeti — and color-changing spoons, the philosophy behind its taste is serious business.

Owner and founder Tony Quach was preparing for the LSAT until he visited shaved ice concepts during a stint in Los Angeles. There, he realized the potential for something similar in New York City tailored to a wider customer base.

With his life savings and a loan from his mother, Quach opened his first Snowdays unit in 2014. Snowdays stands out from competitors with its ingredients. The brand uses fresh, locally sourced dairy, as opposed to the powdered milk and syrups typically used by shaved ice vendors.

“I knew that if I was going to bring this to a mass market in New York, I really had to debut the concept in a more artisanal way,” Quach said.

While the concept does incorporate Asian ingredients, such as grass jelly and red bean, it also satisfies a more mainstream palate with flavors like Yetitracks, a trademarked cookies ’n cream-esque blend of Oreos and blueberries.

Snowdays has since expanded with four more units in New York City and the addition of vegan flavors, coffees and hot chocolates. Next for the brand is franchising: Two franchised locations are looking to open this year and Quach is talking to possible franchisees in New Jersey, Florida and Texas.