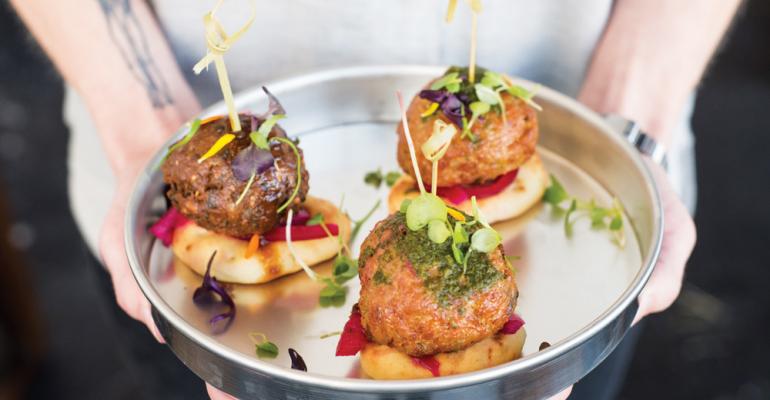 Start Slideshow ›
The Indian fast-casual brand is growing, but don’t call it the next Chipotle

Curry Up Now got its start in 2009, in the San Francisco Bay Area, as a food truck serving Indian-food mashups like tikka masala burritos, deconstructed samosas and “sexy fries,” Indian-inspired poutine on a base of criss-cut sweet potato fries.

It still has the food truck, but today it’s joined by six brick-and-mortar locations in the Bay Area; a catering arm; and two outlets of a bar called Mortar & Pestle serving cocktails kicked up with Indian flavors, microbrew beers and wine.

In addition to its own organic growth, Curry Up Now accelerated its expansion when it acquired Tava Kitchen, a competing Indian fast-casual concept and a 2016 NRN Breakout Brand. The deal gave Curry Up Now its first location in Alameda, Calif., with an open food assembly line, driving home the quality perception.

Industry observers have long singled out Indian as the next big cuisine to be digested by mainstream America, and some have called Curry Up Now the next Chipotle. But Kapoor shrugs off the designation.

“Tava was the Chipotle of Indian food. We’re not that,” he told NRN in May 2017. “We have more in the way of service and offer a more intimate food experience. It’s not fast food.”

It may not be the next Chipotle, but growth is most certainly on the menu: Curry Up Now is planning to open more restaurants and could soon make its first leap outside the Bay Area.