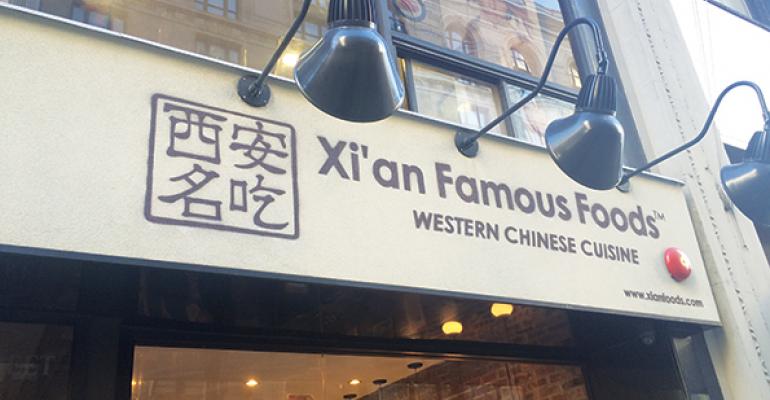 Technically, Xi’an Famous Foods is a Chinese restaurant, but don’t expect kung pao chicken or sweet-and-sour pork at this idiosyncratic chain. The owners of this nine-unit concept, father-and-son team David Shi and Jason Wang, specialize in the cuisine of the ancient Chinese capital of Xi’an in north-central China.

The terminus of the ancient Silk Road, Xi’an was a cosmopolitan city 2,000 years ago, and a unique and complex cuisine was developed there. That includes the spicy cumin lamb that’s featured in many of Xi’an Famous Foods’ dishes.

Founded in a 200-square foot basement in the Golden Shopping Mall in the predominantly Chinese neighborhood of Flushing, N.Y., in Queens, Xi’an Famous Foods soon saw lines out the door, and Wang reportedly saw the potential for expansion. Its distinctive menu and the hip-hop music generally played in the restaurants drew crowds as well as media attention — the chain has been featured on Andrew Zimmern’s “Bizarre Foods” and Anthony Bourdain’s “No Reservations,” both on the Travel Channel.

Much of the food is now made in a central commissary to maintain consistency and speed up service, but the signature spice blend remains closely guarded secret and is reportedly made by Shi himself.

Now 11 years old, Xi’an Famous Foods still draws long lines at lunch, and the ownership strives to make sure guests enjoy their food. The menu board warns: “When hot noodles cool down, they get bloated, mushy and oily. If you must take your noodles to go, please at least try the noodles in the store ... so you can get the best possible Xi’an Famous Foods experience.”