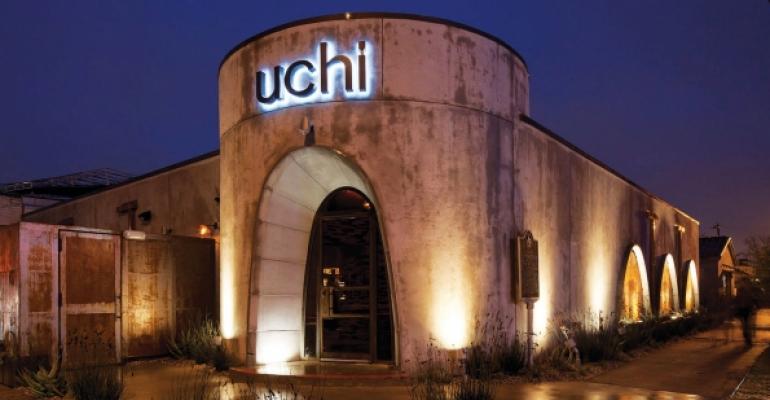 Uchi, which translates from Japanese as “house,” has made itself at home in Texas and now is looking to expand the fine-dining brand beyond the Lone Star State.

Created by chef and sushi master Tyson Cole, the first Uchi opened in a refurbished house in Austin, Texas, in 2003 and soon developed a dedicated following for its blend of Japanese tradition and new flavors.

Cole has since opened two more Uchi locations, a second in Houston in 2012 and a third in Dallas in 2015. Cole and his team extended the brand with Uchiko, translated as “child of Uchi,” in Austin in 2010 and the Asian-inspired American Top Knot in February, occupying the second floor of the Uchi space in Dallas.

Uchi has grown its footprint as well, with the original concept at 2,700 square feet and 100 seats and the more recent restaurants at around 5,000 square feet and 200 seats. Menu prices for “cool tastings” and “hot tastings” plates range between $12 and $22. The popular six- and 10-course chef’s tasting menus are market priced, usually around $100 per person.

Cole, who in 2011 took the title of best chef in the Southwest in the James Beard Foundation Awards, has crafted a menu that includes tasting menus, rolled makimon sushi, grilled yakimono proteins, tempura as well as sushi and sashimi.

The parent Uchi Restaurant Group early in February changed its name to Hai Hospitality.  Hai is a Japanese word that translates as “Yes,” “I agree” or “heard.”

Cole said “hai” has became a part of the Uchi vernacular.

“Answering questions with ‘hai’ isn’t just a ‘yes’, it really means ‘heard,’” he said in a statement. “The idea that you are taking the simple act of answering a question to another level of respect is powerful.”