The first thing to know: There is no Bob. But executive chef and partner Matt Wilde liked the name for his Chicago pizzeria, opening Bob’s in 2019 and quickly expanding with one more store each year for a total of four today.

“We’re not finished,” he said, “and I could envision the possibility of opening Bob’s all over the country and having it become a household name.” If that happens, he stressed, it must happen with integrity and without losing the craft, homemade concept.

Wilde’s background is in fine-dining kitchens, so before opening the first restaurant, he experimented with recipes and landed on a fitting tribute to the store’s Pilsen neighborhood. Bob’s serves “Pilsen-style pizza,” using Chicago’s local Old Style beer instead of water in the dough — the carbonated beer merges with the yeast for a texture that’s crisp on the outside and airy in the middle.

When pizzas come out of the oven, they’re garnished with a fresh herb mix, sea salt and cracked pepper, just like Wilde would finish a plate on the pass of a high-end restaurant. Customers appreciate the thoughtful touches, but they also flock toward unique menu items like the fan-favorite Pickle Pizza.

“The first three months we were open, I couldn’t sell it,” says Wilde. “But eventually it blew up, and now people drive in from all over the Midwest just to try this pizza.”

Sizzle Pie opened its first store in Portland, Ore., in 2011, with a menu that was one-third vegan, one-third vegetarian and one-third omnivore. Stores feature art and aesthetics influenced by heavy metal, and all the pizzas get fun names like 6 Degrees of Kevin Bacon, Spiral Tap and the Four Horsemen.

Today, Sizzle Pies has six brick-and-mortar locations, with five in Oregon and one in Reno, Nev., plus several outposts in Portland-area sporting arenas. Owner Matt Jacobson says that another store is under development right now in Hillsboro, Ore., and he hopes to keep going.

“We’d absolutely like to open more stores, but it feels like there’s a new curveball every few months that gets layered on top of the existing curveballs we’re all trying to navigate,” he said. He calls the labor crisis the single biggest obstacle impacting restaurants today.

While the world shakes out, Jacobson will keep navigating the uncertainty, slinging pies to a loyal customer base who appreciates the wide selection of pizzas, including better-than-usual vegan options. “We have a lot of fun specials and thoughtful recipes,” he said. “It’s not just fake meat and cheese.”

It’s difficult to stand out in a city known for pizza. But when Roberta’s opened in Brooklyn’s Bushwick neighborhood in 2008, armed with a wood-fired oven and Neapolitan pies, it captured local attention and soon faced lines of hungry customers.

The Brooklyn mothership is still a popular destination for locals and visitors, who can spread out in the sprawling back yard, filling picnic tables with pizzas. The priced-per-person group dining menu is popular for birthdays and other celebratory occasions, and there’s even an on-site Tiki bar slinging tropical drinks, beers and wines. But you don’t have to live in New York to experience Roberta’s.

The plucky upstart has capitalized on its Brooklyn bona fides, opening two more full-service locations in New York and one in Los Angeles, and is parlaying a Nashville pop-up into a permanent space. Over the past couple years, Roberta’s has expanded its footprint to include quick-serve outposts in Chicago, Houston and New York City food halls, allowing the now nationally-recognized brand to serve the same wood-fired pizzas to a broader customer base.

DeSano Pizza Bakery opened in Nashville in 2012. In the decade since, the company has tweaked its name and expanded outside the city, and the state, to host locations in Austin, Charlotte, N.C., and Los Angeles, plus airport eateries in Fort Lauderdale, Fla. and Charleston, S.C. With nine stores under its purview, DeSano makes traditional and specialty Neapolitan pizzas in 9-, 12- and 16-inch sizes, plus calzones, salads and cannoli. Customers can order beer and wine to enjoy at communal tables, or place food orders via their favorite delivery services.

DeSano embraces the Neapolitan concept by importing flour, mozzarella and tomatoes from Italy. And central to each location are visible, wood-fired ovens sourced from Naples that reach up to 900 degrees, allowing the restaurant to bake pizzas in a speedy 90 seconds.

Sammy Mandell opened Greenville Avenue Pizza Company in his hometown of Dallas in 2007, when he was just 24 years old. The small shop served slices and whole pies on a popular nightlife strip in Dallas, catering to late-night crowds and delivering to the neighborhood’s densely packed residents. Today, Mandell and his wife own three stores, having expanded into East Dallas in 2017 and opening in Richardson, a nearby suburb, in 2021. The latter is the company’s first full-service restaurant, with a dining room and bar.

Mandell said his growth plan has been slow by design, as he wanted to build the business without taking on more debt. Today, growth is in his sights, but like all restaurateurs, he’s navigating the pandemic-era labor shortage, so he’s being patient and waiting to strike. “We want to keep growing and to expand our reach, but there’s no magic number,” he said. “Our goal is to be that welcoming, local pizza restaurant in [Dallas-Fort Worth], even as we expand to more locations.”

GAPCo, as the restaurant is affectionately known, takes culture seriously. Its employees are paid well, and they buy into the brand’s “Pizza Slayer” persona, which sees employees making pizzas up front, wearing holsters that contain pizza slicers and dough knives. And regular menu specials commemorate holidays, from Cinco de Mayo to 4/20. Mandell wants the brand to maintain its fun, slightly irreverent identity, no matter how big it gets.

“I’m a small business, not a corporation,” said Mandell. “We need the culture to be right, and I don’t want to see that diminished by growing too quickly.”

Serious Pizza serves 30-inch pies and massive slices that could be used effectively in a game of hide-and-seek. A floating DJ booth provides the evening’s soundtrack, and visible staffers twirl dough above their heads as rapt customers look on.

“Serious Pizza is timeless, nostalgic and fun — serious about food, but not much else,” said Imran Sheikh, CEO and founding partner of Milkshake Concepts, which owns Serious Pizza. He believes in the restaurant’s potential to scale because it’s a sustainable food type with in-store sales and a delivery component, and he thinks the dining experience separates it from its peers.

Serious Pizza had been operating one location for a decade in Dallas’s bustling Deep Ellum neighborhood when Milkshake Concepts acquired it in 2020. The hospitality group has big plans for the brand. They opened a Fort Worth store last year and are working on a third at Grand Prairie’s Epic development, where it will live alongside two other Milkshake-owned sister concepts and share a full bar and live music stage.

Sheikh said the goal is to add at least one more location in the second half of 2023 and two to three more in 2024. “We will almost certainly open more corporate-owned stores, but franchising isn’t out of the question in the medium to long-term, and we absolutely expect to have at least 20 stores online within five years,” said Sheikh. “With that said, we always stay fluid, agile and open to evolution and change.”

Everyday Hospitality owns a handful of restaurants across New York City, including Sauce, which serves pasta, meatballs and chicken parm. Its sister concept is Sauce Pizzeria, a pizza-dedicated offshoot that opened its first location in 2018 and quickly expanded to four stores. Three Manhattan locations were joined earlier this year by a quick-serve spot in Penn Station’s Moynihan Train Hall.

Sauce pizzas are available with thin, square and gluten-free cauliflower crusts, and add-ons include salads and Boylan’s natural sodas. The nostalgic pizza parlor embraces its name, with simmering pots of homemade sauce cooking behind the counter at all hours. Guests are given their favorite sauces on the side, so they can dip each bite or dunk the crusts for a flavorful end to the meal. 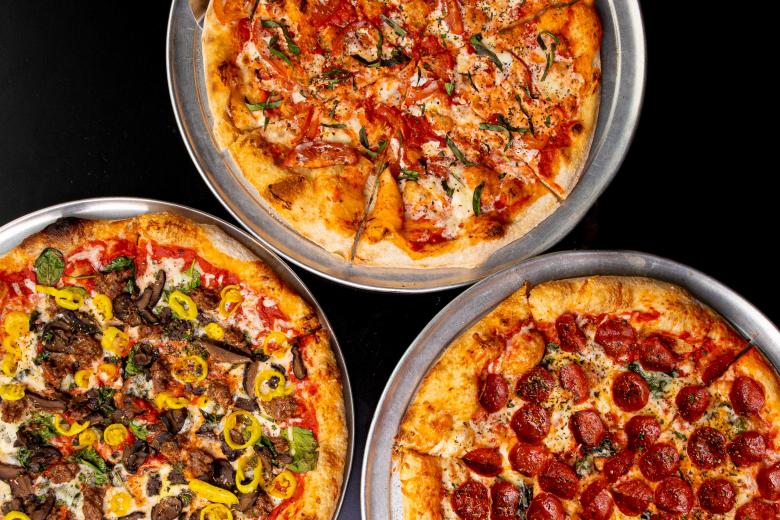