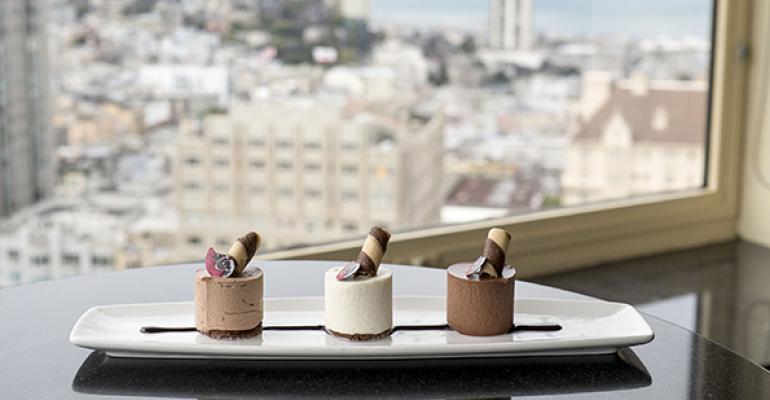 More chefs give the chocolate variant a chance

Chocolate has long been — and continues to be — a top flavor on dessert menus. White chocolate, although it may not be considered “true” chocolate, is increasingly appearing on menus.

White chocolate is typically a mixture of sugar, cocoa butter, milk solids, lecithin and vanilla, as opposed to milk, dark or bittersweet chocolates, which are all made from the tropical cacao bean. The white chocolate mixture results in a solid un-chocolate of sorts that has a reputation for being extra sweet and lacking in chocolate flavor.

“As pastry chefs, you are always told you must have chocolate on the menu,” said Cora Cotrim, co-founder of Atlanta-based Queen of Cream. “I think most chefs are finally giving white chocolate a chance, as it got a bad rap for a while. With all of the small producers of chocolate these days, the quality of white chocolate has gone up, making it exciting to work with it again.”

Indeed, more chefs are experimenting with this lesser-loved chocolate. According to Datassential MenuTrends, white chocolate appears on 8 percent more menus than it did four years ago.

Cotrim, whose company currently sells craft ice cream via Queen of Cream mobile food carts, created a Caramelized White Chocolate ice cream for the menu at her spinoff
ice cream and coffee parlor, slated to open at the end of August. Cotrim likes the creaminess of white chocolate, but says the flavor “lacks a bit of life.” To bring more depth of flavor, she chose to caramelize it.

“One of the main reasons that white chocolate is appearing on more restaurant menus is because the calm flavor allows you to pair it with a larger flavor profile,” Larke said. “There is such an abundance of flavor and technique around us that can enhance the flavor of white chocolate.”

This fall, Larke plans to continue to explore white chocolate, perhaps pairing it with acidic fruits like pomegranate and blood orange, a flavor profile that she says will “tie into Embeya’s progressive Asian menu.”

“[White chocolate] is definitely trending because of the qualities and flexibility of chocolate,” Rakun said. “By itself, white chocolate has a bland, sweet taste, but combining the right amount of salty, sweet and sour rounds out the flavor. I feel people would be into trying a new twist on white chocolate.”

“It can be used for savory applications, as well as typical sweet,” Rakun said. “I once served white chocolate sorbet, caviar and seared scallops. The possibilities seem endless.”

Earlier this summer, at Top of the Mark at the InterContinental Mark Hopkins in San Francisco, executive sous chef Chad Bayless served a Triple Chocolate Mousse, a chocolate flight featuring Valrhona white, milk and dark chocolates. It was the first time Bayless used white chocolate on the menu at Top of the Mark.

“I've always liked the buttery sweetness of white chocolate, and want to share some of this with my guests,” Bayless said.

While some chefs are experimenting with white chocolate for the first time, Paul Lynch, executive chef of FireLake Grill House & Cocktail Bar in Bloomington, Minn., has been using it in his desserts for a while now. For example, his White Chocolate Banana Cream Pie with salted caramel first appeared on the menu a few years back, but has since become so popular that Lynch said it’s now a mainstay on the menu.

“Chocolate sells,” Lynch said. “We used white chocolate because we found that dark or milk chocolate was too assertive and dominated the flavor of the dish.”