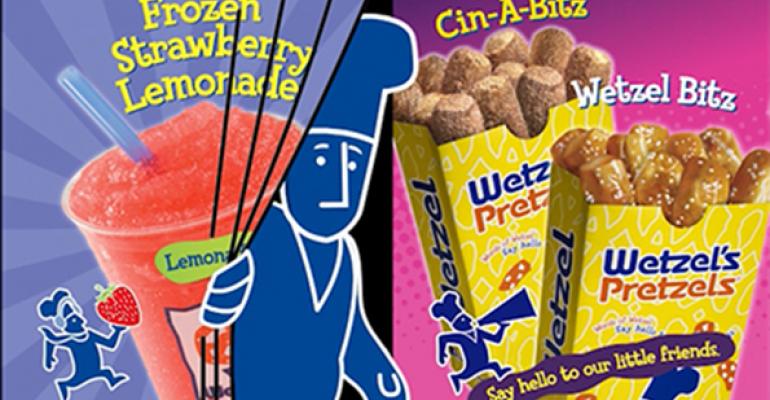 Wetzel’s Pretzels LLC has put its “Wetzel Men” baker characters to work as the stars of new animated menu boards, which the company is rolling out systemwide.

Pasadena, Calif.-based Wetzel’s, which has 275 mostly mall-based units in the United States, debuted the new 12-foot-wide, 27-inch-tall animated boards in November at its Downtown Disney District location at Disneyland in Anaheim, Calif.

Every five minutes, cartoon-like Wetzel baker characters pull back the curtain and move around the boards, which feature such menu items as pretzels and lemonade.

The boards are now in eight franchised units, as well as the Downtown Disney location, said Bill Phelps, chief executive and cofounder of the 20-year-old snack brand.

“It got great reception by both the franchisees and guests, so it’s something we are rolling out fairly quickly in 2015,” Phelps said. “We hope to have the new menu boards into about 150 stores by the end of 2015.”

The new menu boards cost about $9,000, with a fee of about $100 a month to maintain, Phelps said. The animations and boards are updated from the franchisor’s central server.
Demand from both landlords and customers led to the development of the animated menu boards, he said.


“Landlords want tenants to do some things that are more fun and exciting,” Phelps said, and customers want to be entertained.

Wetzel’s was well positioned to add animation to its boards, he added. About five years ago, the chain removed pricing information from and simplified its back-lit photo boards, which now feature beauty shots of menu items.

With the digital animations, the photos are interrupted every five minutes with what Phelps calls “the Wetzel Men.”

“The customers waiting in line just smile, like it’s part of the whole show,” he said. “We don’t take ourselves too seriously, so it’s a fun place to get a fresh-tasting snack. These capture the brand. They capture the fun and the essence of the brand.”

Because the animations and product photos are updated from a central computer server, Phelps said he expects to see savings in the long term.

“You can come out with a new product, create an animation and send it out to all the stores literally overnight,” he said.

Phelps said it took nine months from conception until the first menu boards were installed and operative.

“We have a great relationship with our current advertising agency, O’Leary and Partners,” Phelps said. “We gave them the vision, and they really grabbed onto it.” O’Leary of Newport Beach, Calif., collaborated with the Chop Shop Entertainment production company to create the boards.

But Phelps said animated digital menu boards might not work for all quick-service operators.

“We have the advantage of being an impulse business,” he said, similar to cookie and ice cream snack brands.

Phelps and Rick Wetzel, president of the company, invested in Wetzel’s Pretzels when it was acquired in January 2007 by Los Angeles private equity firm Levine Leichtman Capital Partners, which also invested in CiCi’s Pizza and Quiznos.

Wetzel’s Pretzels has 275 units in 37 states, and 25 additional units abroad.