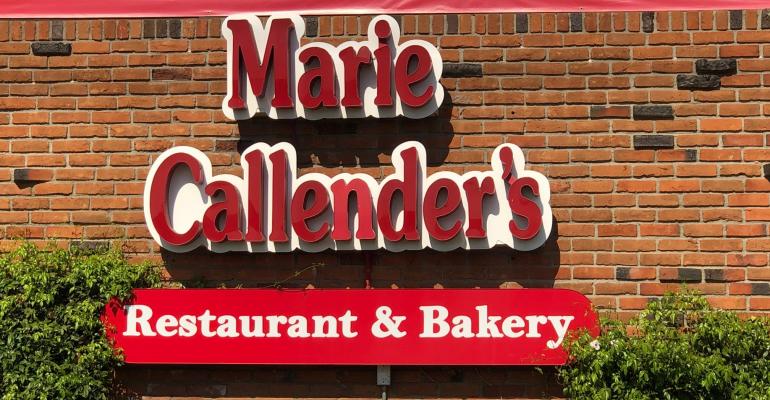 The owner of Slater’s 50/50 is sinking money into another down and almost out brand.

“We want to rekindle the brand and showcase it all over again,” said Mike Nakhleh, president of Wyoming-based Elite.

Elite, which was formerly based in Los Angeles, has been on buying spree the past few years. During the summer, it acquired the assets of the 68-unit Gigi’s Cupcake chain out of bankruptcy. Elite also owns fast-casual Mediterranean concept Daphne’s, Patxi’s Pizza, and Slater’s 50/50.

Marie Callender’s was up for grabs after Huddle House Inc. agreed in September to buy only 342 Perkins Restaurant & Bakery locations in a bankruptcy asset sale.

Nakleh said he saw an opportunity to revive the nostalgic family dining chain, born in Southern California as a wholesale pie-baking business in the 1940s. The Perkins bankruptcy has inadvertantly been good for sales, which are up 30% year over year, Nakleh said. Traffic picked up in stores becasue the brand was in the news.

He said he plans to grow the chain through franchising and corporate stores. Future locations will have a drastically smaller footprint, roughly 2,500 square feet, and will focus on what the brand is known for: pies.

Specifically, before Thanksgiving, he plans to partner with a third-party delivery operator to market last-mile delivery of family style meals and pies.

Currently, 80% of existing restaurants serve breakfast, though many people are not aware of it. Those restaurants will not be forced to change hours, Nakhleh said.

“It’s a brand people know and love but it’s been forgotten over the years,” Nakhleh said.

In December, he plans to reopen five of the 19 restaurants that closed. The locations are in Salt Lake City, Utah, and four in California: Fresno, Torrance, Bakersfield and Modesto.

He plans to open the first prototype restaurant in Northridge, Calif., which was previously home to Marie Callender's busiest resataurant. That location closed before Elite could buy it, Nakleh said.

With the purchase of Marie’s, Elite Restaurant Group’s portfolio has grown to 180 locations. The company's philosophy is to buy depressed restaurant companies with high brand recognition.

Elite bought six stuggling Slater's 50/50 restaurants in 2016, and has been growing the bacon-centric burger brand ever since. The chain, founded in Anaheim, Calif., now has 11 locations including out-of--state units in Texas and Hawaii. Eight restaurants are under construction including several in Central and Southern California. A Denver location is slated to open in 2020.