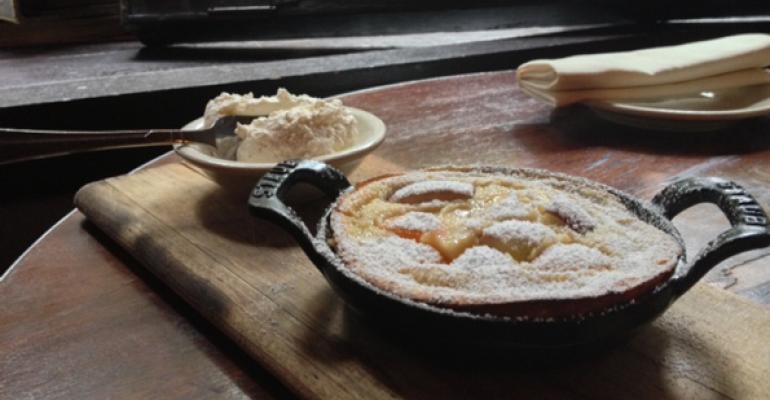 For many people, summer means the sun, the beach, vacations, longer days and shorter work hours. But for chefs, summer means stone fruit.

Cherries, peaches, nectarines, plums and apricots all reach their peak of deliciousness at some point between June and September. Chefs at both independent and chain restaurants take advantage of that fact, often introducing simple menu items that let the fruits speak for themselves.

“They really bring you into the season,” said Paul Gerard, chef of Exchange Alley, a new restaurant in New York City. “I’ve bitten into a nectarine before that’s [emotionally] moving,” he said.

Gerard aims for simple preparations that highlight the ripe fruit. At this time of year he’ll offer cherries and cream or peaches and cream as dessert items. “All I do is wash them and serve them with a little bit of honeycomb and a little bit of cream,” he said.

Other times he’ll serve lightly grilled peaches or peach clafoutis — peach with cake batter poured over it and baked to order.

“You don’t want to cook it for too long because you want to retain the integrity of the fruit; you want some push-back on the fork,” he said.

Stone fruits are also kid friendly. Research by the Produce for Better Health Foundation, a nonprofit organization with the mission of increasing fruit and vegetable consumption, indicates that peaches and nectarines are among children’s favorite fruit.

And they have a health halo, according to Jonathan Fornaci, president and chief executive of Rita’s Italian Ice, who reports that the 650-unit chain’s Sugar Free Mango Peach ice now ranks as one of its top five flavors.

Frozen yogurt chains also have noticed the appeal of stone fruit at this time of year. New York-based 16 Handles added a line of seasonal “Farm to Fro-Yo” items for the summer, including a peach yogurt, at its 37 locations. Pinkberry introduced cherry frozen yogurt for the summer to its 230 units, as well as a Cherry Chocolate shake made by blending the new yogurt with dark chocolate shavings from its topping bar.

Other frozen-dessert chains are making use of stone fruit, too. Bruster’s Real Ice Cream, a 200-unit chain based in the Pittsburgh area, is making peach ice cream available through the end of July as part of a new line of seasonal offerings.

Although a full 30 percent of menu items with stone fruit — mostly peaches and cherries — are added by chain restaurants in the summer, according to menu research firm Datassential, nearly as many stone fruit items are added in the spring, such as 145-unit Corner Bakery Café’s fruit-filled hand-pies, including a peach-filled one sprinkled with cinnamon sugar.

Correction: July 31, 2013  An earlier version of this article incorrectly stated that Exchange Alley is in Brooklyn, N.Y. It is in the New York City borough of Manhattan.